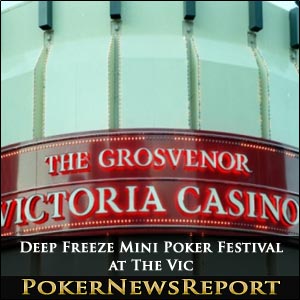 Poker players in London can look forward to more than just turkey sandwiches and Christmas sales after December 25 with the announcement of the Deep Freeze Mini Poker Festival.

The Vic, which is one of the longest-established casinos in the European country after being set up in 1964, are also holding an £80+£12 Freezout Super Satellite event on the 21st at 19:45 GMT that will provide winners with tickets – worth £715 – to all three of the Deep Freeze Mini Poker Festival tournaments.

Entrants will begin the satellite event with 7,500 starting chips, while there will be six, 20-miute levels, as well as another half-dozen 30-minute levels.

So, if it’s some poker action you’re looking for – whether to escape the family or avoid the overwhelming rubbish that appears on television screens every year around this time – then, if you can make it down to London, you’ll be in for some further festive fun.

All three tournaments begin at 19:00 GMT.