Michael Wright won the Boylepoker International Open (IPO) after picking the right tournament to play in and decimating the business end of the final table. 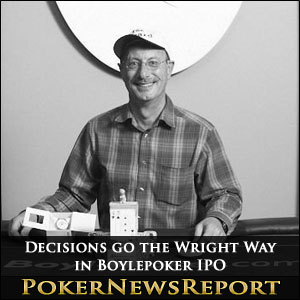 Michael Wright won the Boylepoker International Open (IPO) after picking the right tournament to play in and decimating the business end of the final table.

Boylepoker´s decision to move the IPO from Dublin to London this year may have backfired terribly (only 344 players ponied up the £225.00 buy-in compared to 1,148 when the event was hosted at the Regency Hotel in Dublin last year), but there will be no complaints from the tournament winner – Michael Wright – who collected £10,105 for his victory at Asper´s Casino in the Olympic Stadium at the weekend.

Wright – who is a familiar face at Nottingham´s Dusk till Dawn poker club – chose to compete in the Boylepoker IPO rather than DTD´s £½ million guaranteed Monte Carlo, which also took place this weekend and was won by Kevin Allen, or take the trip over to Germany for the EPT Berlin. Not only did his choice of events prove lucrative, but he wrapped up the business end of the tournament in double quick time.

Setting the Scene for the IPO Final Table

As played resumed for the climax of the Boylepoker IPO blinds were 10,000/20,000 (ante 2,000) and, with four short-stacked players, it did not take long for the fireworks to start. Andrew Sotiriou (J♥ J♣) did his final table prospects the world of good when shoving over the top of Ken San (A♣ J♠) in the first circuit of the button, forcing a fold from Saulius Tumosa and Sotiriou´s pocket Jacks holding on to send San to the rail in ninth.

Asif Yusuf was quickly to follow San out of the tournament – moving all-in with J♦ 10♦ and running into the pocket Q♣ Q♦ of Tumosa – and just moments later Kirit Patel (A♠ 7♥) failed to find an Ace to best Sandeep Phull´s 10♥ 10♣ and he was eliminated in seventh. Late arrival Andrew Berkecz (7♣ 5♣) managed to lose the majority of his stack to Tumosa (J♦ J♥) following a flop of 3♣ 9♣ 4♦ (Berkecz missing all his outs) and then risked the last of his stack with A♥ 2♥ against the Q♣ Q♠ of Andrew Sotiriou and was bust in sixth.

Wright can do no Wrong

With the table now five-handed, a deal was negotiated which would guarantee the remaining players at least £5,900. Overnight chip leader – Saulius Tumosa – was the player who most benefitted from the jump in prize money, as he was next to leave the tournament; running his K♦ Q♦ into the dominating A♦ K♠ of Michael Wright and enabling Wright to take a massive chip advantage against his final three opponents.

Despite getting one early double-up, Andrew Sotiriou was soon bust from the climax of the Boylepoker International Poker Open. Michael Wright called Andrew Sotiriou´s pre-flop raise from the big blind and, after a flop of 5♣ 4♣ K♦, called Sotiriou´s shove. Sotiriou turned over the A♣ 10♣ for the flush draw, while Wright revealed the 4♥ 3♠ for bottom pair.

Amazingly, the bottom pair held as the turn 6♦ and river Q♥ completed the board, and Michael Wright became the 2013 Boylepoker IPO Champion.