Deauville Cut as a Venue on European Poker Tour

The European Poker Tour has announced that Deauville will not feature as a venue for Series 12 due to falling numbers and “politics and taxation” issues. 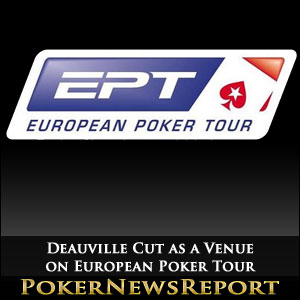 The European Poker Tour has announced that Deauville will not feature as a venue for Series 12 due to falling numbers and “politics and taxation” issues.

The European Poker Tour and the Casino Barriere in Deauville have enjoyed a long relationship. The casino was the venue for the EPT French Open during Seasons 1 and 2 of the European Poker Tour, and then became a permanent spring fixture on the tour in Season 5. It was the venue from which Jake Cody launched his 2011 Triple Crown, and the EPT Deauville Main Event has also created such champions as Vadzim “the dream” Kursevich, “novice” Remi Castaignon, and the Aces-cracking Sotirios Koutoupas.

However, with the number of players entering the Main Event falling for five consecutive years – and there being politics and taxation issues to consider – the decision has been taken to pull the plug on the Normandy venue and the EPT Deauville will be missing from the European Poker Tour when the dates for Season 12 are next announced.

Deauville Not the Most Popular Location

Deauville has never been the most popular location among “overseas” players due to difficult accessibility and a lack of alternative entertainment when compared to such cities as London, Barcelona and Prague.

The number of players entering the EPT Deauville Main Event has fallen from 891 in 2011 to just 592 earlier this month; whereas over the same period the EPT Prague Main Event has seen as increase from 563 entries to 1,007 entries, and the EPT Barcelona has grown from 758 players in 2011 to 1,496 players last August.

Politics and taxation have also had an influence on the decision to remove Deauville from the list of destinations in Series 12 of the European Poker Tour. France´s poker laws make it difficult for players to use funds from their PokerStars.com/.eu accounts to enter events, and 4% tax is deducted from prize pools.

This combination of factors has resulted in the European Poker Tour reaching a “natural conclusion” to its relationship with Casino Barriere, although the PokerStars-sponsored French Poker Series (FPS) will continue to be hosted at the venue.

With the exception of Barcelona and Prague – for which the dates have already been announced – the only three other stops likely to remain unchanged on Season 12 of the European Poker Tour are London, the PCA Caribbean Adventure and the EPT Grand Finale in Monte Carlo.

This leaves a potential for three more legs of action next season, and the European Poker Tour is holding its cards pretty close to its chest about where these may be. Malta is being trialled next month as a replacement for San Remo, and previous venues that have attracted significant participation include Vienna and Berlin.

With their being no other PokerStars-sponsored “national” tours to run EPT events alongside (UKIPT/London, IPS/Malta, Eureka/Prague and Estrellas/Barcelona), the possibility exists for some surprising venues to be announced when the full schedule for EPT Season 12 is announced.

With accessibility, politics and taxation being determining factors, maybe Dublin, Amsterdam or even Gibraltar could feature on the European Poker Tour in 2016 – meaning that there would not be so many French players, and everybody would have a far nicer time!