Deal or No Deal as Linton Leads the ISPT 6

DTD regular Pete Linton leads the six-handed final table of the International Stadiums Poker Tour after a titanic battle for the chip lead and some good fortune. 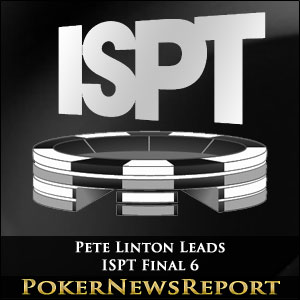 DTD regular Pete Linton leads the six-handed final table of the International Stadiums Poker Tour after a titanic battle for the chip lead and some good fortune.

When play resumes at Wembley this afternoon for the climax of the International Stadiums Poker Tour, much of the speculation will be over whether the six remaining players can agree on a deal which will see the eventual winner share the €1 million first prize with his or her opponents around the table.

With such a big discrepancy between the first place prize and the remaining payouts, there were long discussions during the dinner break yesterday when the official final table of 9 was reached; with the most deliberated suggestion being that players should take the ICM value of their chip stacks and leave €200,000 to play for.

No deal was agreed when the play was nine-handed, but with much more at stake today – and following a day of ever-changing chip leaders – it seems feasible that the six remaining players will be prepared to lock up as much as they can as soon as play gets started.

Pete Linton may have been at the top of the chip counts when the chips were bagged and tagged last night, but for much of the day it appeared that the climax of the ISPT Main Event would be fought out between Nick Hicks, Jakub Michalak and the player who started Day 5 of the tournament with the chip lead – Alban Juen.

Indeed, Alban Juan started off Day 5 in the same way as he concluded Day 4 – getting lucky. Just after James Sullivan had been the first player to depart in the first hand of the day (A♥ J♥ < K♣ K♥ of Ferhad Seyadi), Juen snap-called Neil Benardout´s shove with A♥ 10♣ with his own K♥ K♣. Benardout was looking in good shape after the flop of Q♣ A♦ 10♦, but the J♣ on the Turn gave Juen a straight and busted Berndout from the tournament in nineteenth.

A swathe of rapid exits from the ISPT Wembley followed; during which time Nick Hicks moved into the chip lead with the elimination of Leigh Wiltshire (J♠ 10♥ > K♣ K♥ – Hicks completing a straight on the River) and Jakub Michalak moved right up behind him with a series of aggressive post flop raises which enabled the Polish poker player to take down valuable pots unchallenged.

After three levels of play the field of twenty that had started the day had been reduced to just eleven players, and Alban Juen was back in the chip lead after tormenting Dave Ulliot for three hours (Ulliot eventually bust in 14th to Julian Gardner K♦ J♦ < A♥ 8♠) and then 6-bet shoving Nick Hicks out of 1.3 million chips.

Pete Linton had enjoyed a pretty good second level of the day – forcing Florian Hoeller and Jakub Michalak out of valuable pots with big post-Turn raises and chipping up against Jean Miguel Lacerda when his 7♣ 7♠ were too good for Lacerda´s A♦ Q♦, but Linton´s leap into a clear chip advantage came in the most fortunate of circumstances when the game was reduced to nine players.

Linton (A♠ 8♠) had min-raised from the Small Blind into Julian Gardner (10♦ 5♦) in the Big Blind. Gardner made the call and after the flop of 10♥ 9♥ 10♠, Linton led with a bet of 240,000 chips. Gardner raised to 550,000 chips and Linton effectively put his opponent all-in with a three-bet up to 2.7 million chips. Gardner snap-called and was a 92% favourite to win the hand with his trip Tens, but the 4♠ on the Turn and K♠ on the River gave Pete Linton the nut flush and Julian Gardner was to finish the event in ninth position.

Two more eliminations followed which reduced the final table to six players. Gwendoline Jadot bust out Jerome Brion in eighth place when her A♣ K♣ paired with the K♦ on the flop to best Brion´s 10♣ 10♠, and Nick Hicks chipped back into third in the chip counts when he sent Ferhad Seyadi to the rail in seventh 7♠ 7♣ > J♣ 2♣.

Looking Ahead to Day 6 of the ISPT

When play resumes at Wembley this afternoon, the players will be twenty minutes into Level 28 (blinds 50,000/100,000 – ante 10,000). The big question is will the players agree to a deal in time to catch the British Airways flight to Las Vegas (departs 16:40) or will the €1 million first prize go to just one player? All of the players are well-stacked and it could be a tense and exciting finale to the International Stadiums Poker Tour. Who will win? You can find out by following PokerNewsReport on Twitter!