Despite promises of better communication from Full Tilt Poker, and assurances from the Alderney Gaming Control Commission (AGCC) that they were willing to act “transparently”, not a word was heard from the Riverbank Park Plaza Hotel on Monday where representatives of Full Tilt Poker are supposed to be fighting for their operating license and their online existence. 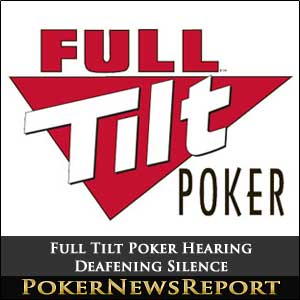 Despite promises of better communication from Full Tilt Poker, and assurances from the Alderney Gaming Control Commission (AGCC) that they were willing to act “transparently”, not a word was heard from the Riverbank Park Plaza Hotel on Monday where representatives of Full Tilt Poker are supposed to be fighting for their operating license and their online existence.

The AGCC have three alternative courses of action they can pursue. The first is to revoke Full Tilt Poker´s operating license – an action which will result in Full Tilt Poker also having their secondary licence withdrawn by the Kahnawake Gaming Commission and their license to operate in France cancelled by Arjel. With the first hearings for the DoJ indictments scheduled for the end of the month, the revocation of Full Tilt Poker´s operating license would effectively bring an end to the online poker site.

The second alternative is to allow Full Tilt Poker to open up again on a restricted basis to enable them to start drawing in revenue from the rake paid on poker games and to make the site more attractive to a potential investor. As unlikely as this sounds (due to the mass withdrawals that would ensue), the AGCC have acquired a reputation for backing down on straightforward issues and shown themselves to be a toothless entity. If this is what Full Tilt Poker press for, it is what they might achieve.

The most likely resolution from the AGCC hearing is that nothing will happen at all. The AGCC will rely on their third option to extend the suspension of Full Tilt Poker´s operating licence until after the DoJ hearings to see what level of fine the companies are required to pay and how that affects their liquidity. Once the exact shortfall in players´ bankrolls is known, the AGCC may be able to make a more informed decision about the future licensing of Full Tilt Poker.

The only new “truth” emerging from the otherwise meaningless statements issued by Full Tilt Poker in recent months, is that they have engaged “Sea Port Group Securities” to pursue a new investor for them after talks with other potential investors broke down. However, with the volume of allegations being made against the way in which Full Tilt Poker defrauded their players, it is unlikely that anybody would want to pick up the disgraced poker site in its current state.

This leaves the situation in an impasse. It would appear that Full Tilt Poker would like to pay their players back, while many of their former players have indicated that would like to remain as clients on the site. However, until Full Tilt Poker can fulfil the obligations of section 2 of the AGCC´s licensing requirements (“A Category 1 eGambling licensee shall not have recourse to funds standing to the credit of a registered customer”) and explain to the AGCC why they failed to segregate player´s funds from their own operating accounts, the AGCC should not allow Full Tilt Poker to re-open.

Possibly more will be known at the conclusion of Day 2 of the AGCC / Full Tilt Poker hearing enters its second day but, for now, the silence is deafening.