History will record that Simon Deadman won the WPT National Main Event Dublin this past weekend. Those who witnessed the final table action will remember how! 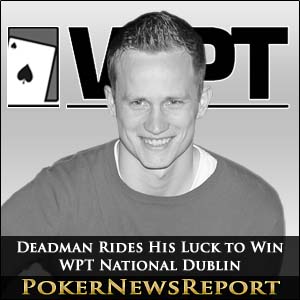 History will record that Simon Deadman won the WPT National Main Event Dublin this past weekend. Those who witnessed the final table action will remember how!

Simon Deadman added to his GUKPT victory in November and recent second place in the Stoke leg of the Genting Poker Series by taking down the WPT National Main Event in Dublin. However, whereas you would accept that a little luck is needed to win any poker event, Deadman benefitted from some incredible good fortune to help him on his way to victory.

The player from Nottingham started the day in fourth position (of 10) with a slightly above average stack of 734,000 chips behind overnight chipleader Sean Prendiville. Deadman quickly increased the size of his chip stack by eliminating the short-stacked Charley Harvey (A♦ J♠ > 9♦ 10♣), courtesy of a board containing four spades to make his flush, and then this happened:-

Deadman Rivers Back to Back Sets

One of the strongest “home” players expected to do well on the final table of the WPT National Dublin was Fintan Gavin. Gavin has a host of domestic victories to his name and a win in a UKIPT Main Event (Edinburgh 2011), but he tried to play his AK too cleverly on a flop of Axx, and was crushed when Deadman hit an Eight on the river to complete a set.

In the very next hand, Party Poker qualifier Philip Danner got all his chips into the middle with A♥ A♠ and was called by Simon Deadman with K♦ K♠. Incredibly the K♥ was dealt on the river and the young German was eliminated in ninth, while Deadman took over as the chip leader. Fintan Gavin was to join Danner on the rail soon after – being pushed all-in with J♥ 5♥ by Joachim Haraldstad (10♠ 10♣) and failing to improve past the Norwegian.

The well-supported Dan Laming was the next player to depart in seventh. Again he was manipulated into a pre-flop shove by Joachim Haraldstad, and his Q♥ 9♥ missed all the possible outs to come second to Haraldstad´s 9♦ 9♣. Tommy O´Rourke was then busted in sixth – shoving with 9♣ 9♥ against Simon Deadman´s Q♥ J♠, and Deadman rivering the K♠ to complete a spade flush for the second time at the final table.

Joachim Haraldstad continued his good day´s work with the elimination of Ben Carpenter in fifth (K♥ K♦ > A♠ Q♣) and Jack Salter in fourth (A♥ 3♠ > J♥ 10♦) before Simon Deadman (A♥ Q♥) took care of the last Irishman standing – Sean Prendiville (J♥ J♣) – when Deadman hit the Q♦ on the turn to take the lead in the hand and then, just for good measure, the A♣ on the river.

Deadman and Haraldstad entered the climax of the WPT National Dublin with fairly level chip stacks, but that was soon to change. On a flop of K♥ 8♣ 5♥, Deadman got all of his hips into the middle with K♣ Q♦. Haraldstad made the call with 7♥ 3♥ but – unlike Deadman – could not find the final Heart to complete his flush. Reduced to less than 300,00 chips against Deadman´s 5.5 million, the tournament was finished as a competition – but Deadman still had one more come-from-behind hand to play.

The final hand of the event typified the luck that Simon Deadman had enjoyed throughout the day. After allowing a couple of Haraldstad shoves through, Deadman called one with 9♠ 10♠ and was dominated by Haraldstad´s K♦ 10♦}. Nonetheless, the poker gods were smiling on Simon Deadman in Dublin, and although the flop of 9♥ A♣ J♦ and turn of A♥ gave Haraldstad plenty of opportunities to get back into the game, the 4♦ on the river sealed victory for the poker player from Nottingham.