Christopher Day recovered from being the Bubble Boy in the Irish Poker Championship on Tuesday to lead the 6-handed final table of the UKIPT Hi-Roller Event. 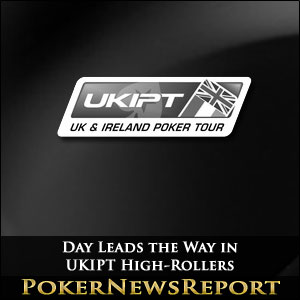 Christopher Day recovered from being the Bubble Boy in the Irish Poker Championship on Tuesday to lead the 6-handed final table of the UKIPT Hi-Roller Event.

The UKIPT section of the Galway Poker Festival is now in full swing (Day 1A of the €1 million guaranteed UKIPT Main Event kicks off later today) and while the excitement of Trevor Dineen´s win in the Irish Poker Championship grabbed most of the headlines, 35 players sat down to compete in Day 1 of the €2,200 buy-in UKIPT High-Roller event. At the end of the day, just six players remained; with the chip leader being the player who fell one place short of being in the money in the Irish Poker Championship – Christopher Day.

Day had been chipping up nicely throughout the day, but the pot which saw him take a massive lead in the event came at the end of Level 9 (blinds 600/1,200 – ante 200) when Lithuanian Anaras Alekberovas called Day´s A♥ K♦ shove on a flop of J♠ 7♣ A♣ with A♦ 9♦. With no help on the turn or river, Alekberovas was bust from the tournament, and Day saw his stack increase to 240,000 chips. By the close of proceedings, Day had amassed 250,200 chips – more than a third of the chips in play.

Behind Day in the chip counts is Kyle Maguire, who finished Day 1 in second place after eliminating Jake Cody when just nine players remained. Cody had got the last of his chips in from the button with K♣ K♠ and Maguire (A♠ 10♥) made the call. The Ace on the flop of A♥ 7♥ J♣ put Maguire in front and he stayed there after the turn (9♥) and river (6♦) to finish the day on 197,800 chips.

The Chasing Pack Have an International Flavour

Behind Day and Maguire there are an Englishman (Niall Farrell – 44,400 chips), a Spaniard (Sergio Aido – 99,700 chips), a Pole (Jan Przysucha – 65,300 chips) and Ireland´s “Sole Survivor” – Dermot Blain – who will enter the climax of the UKIPT High-Rollers event with 64,100 chips after sending William Dorey to the rail in a 10♥ 10♣ > A♣ J♠ confrontation. All the remaining players are assured of a minimum cash of €4,190, but each will be hoping to repeat the heroics of Trevor Dineen and grab the €24,450 first prize which currently looks destined for Christopher Hall.

Looking Ahead to Day 2 of the UKIPT High-Rollers

When Day 2 of the UKIPT High Rollers event starts at the Full Tilt Poker Village in Galway, the players will be half way through Level 10 (blinds 800/1,600 – ante 200). None of the six players are in any immediate danger of busting out as their relative chip stacks look like this:-

Footnote to the UKIPT High Rollers

Gus Hansen had been expected to play in this event, but instead took part in the €40.00 buy-in Daily Grind (event #39) – finishing second for €480.00 to Jonathan Condron (that will look good on his Hendon Mob database!). Irish Poker Champion Trevor Dineen had also entered the High Rollers event but, by the time he finished his heads-up against Steve O´Dwyer, his stack had been blinded down to 1BB – which he shoved with J-8 into Dermot Blain´s A-J to be eliminated in tenth place.