Day 1a From the APPT Macau Is Over 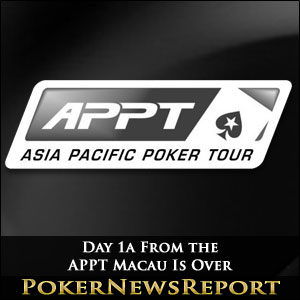 Day 1a of the APPT Macau Main Event finished last night, with a total of 184 players converging on the City of Dreams to play in the event. At the end of it all, 81 of them made it to the second day of play, and they’re likely to be joined by a larger number of players from today’s starting flight.

South Africa’s Charles Lum ended the first starting flight as the chip leader; he finished the day with a stack of 158,500 to his name. He’s closely followed by New Zealander Matt Carter, who is just four thousand chips behind with a stack of 154,100.

With 149,300 chips to his name, China’s Nan Hong is the last of the ‘Big Three’ from Day 1a. Hong chipped himself up in the late stages of the day in what was one of the biggest hands of the first starting flight.

Hong, who had A♥ A♣, eliminated a player and put Ted Wang down to his last 6,000 chips after a post flop showdown between the three players. While the eliminated player flopped a two pair, the 10♣ came on the turn and the 10♥ followed on the river, which gave Hong the higher two pair and put him in a solid position in time for Day 2.

Four other players finished the day with stacks of over 100,000, which has set the stage for a competitive Day 2, especially given the fact Day 1b is still yet to be played. Some notables who have made the cut to Day 2 are this year’s APT Philippines Main Event winner Trung Tran, GuangDong Ltd Asia Millions Warm-Up Nick Wong and 2013 ANZPT Sydney Main Event Winner Dinesh Alt.

Poker great Greg Merson did not fare as well as he was eliminated from the event in its early stages. He was joined by Team PokerStars Celina Lin, who also did not make the cut after being knocked out no the first day of play.

An increased field of players is expected for the second and last starting flight of the Main Event, with between 250 and 400 set to take to the felt at the City of Dreams later today.