Typical of the run-up to Christmas, Day 12 of the Full Tilt Online Poker Series is packed full of anticipation, excitement and surprises – good ones we hope! 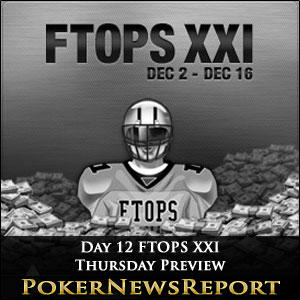 Typical of the run-up to Christmas, Day 12 of the Full Tilt Online Poker Series is packed full of anticipation, excitement and surprises – good ones we hope!

Looking at Thursday´s feature tournaments, you could be forgiven for drawing analogies with the few days before Christmas. Packed arenas searching for that ideal gift (Pocket Aces naturally), the panic of falling behind with your plans (due to the short-stack running down the clock on the bubble) and – certainly as far as today´s action is concerned – some Scrooge-like guarantees!

Just nine events of the 35-tournament series remain, and today´s action starts with a warm-up for the major tournaments still to come. FTOPS #27 is a $109.00 buy-in NL Hold´em Freezeout. No re-buys, no short levels, no double chances or multi-entries – just a plain old NL Hold´em Freezeout which starts at 11.00am server time (4.00pm GMT) and offers a guaranteed prize pool of just $50,000 (maybe [geolink href=”https://www.pokernewsreport.com/full-tilt-poker”]Full Tilt Poker[/geolink] thinks today is the day we all do our Christmas shopping!).

Players start with 5,000 chips, levels are 12 minutes long and late registration is available up until the end of Level 10 (2 hours).  There are a considerable number of players already registered for this tournament due to the low buy-in and number of satellite tournaments which have already taken place (and direct buy-ins by players who prefer their online poker tournaments without the bells and whistles) so, if you are intending to end up in the money, make sure you have kissed your kids goodnight before you sit down to play – this is going to be a long game.

Whereas the tournament which starts at 14.00am server time (7.00pm GMT) is normally the day´s primary tournament, today sees an odd bit of placement with a $322.00 Razz event in the schedule. No doubt the organisers know what they are doing (!), but the fact that FTOPS #28 only offers a $20,000 guaranteed prize pool is a fair indication of how many players are expected to participate in the event.

For those who frequently get the lowest hand at showdown, and fancy their chances in this tournament, the event is a flop limit freezeout with 4,000 starting chips and 15-minute levels until Level 17 – when they increase to 20 minutes each. Late registration is available for two hours until the end of Level 8 and, if you do not have the bankroll to buy-in directly, there could be more than a little value in the last minute satellites.

There are a stack of turbo satellites and super turbo satellites offering at least one guaranteed seat into FTOPS #27 however, in our opinion, the best opportunity to qualify for the target event is in the $5.50 re-buy turbo tournament at 8.00am server time (1.00pm GMT). This tournament offers 10 guaranteed seats to FTOPS #27 and, as it is being played at a time when most Canadians will still be in bed dreaming of a white Christmas, has the potential to be massively undersubscribed (words we have not used much during the Full Tilt Online Poker Series!).

Players searching through the FTOPS lobby for value in the qualifiers to the Razz tournament should keep an eye out for potentially undersubscribed turbo satellites which feed into the primary satellite to FTOPS #28 at 11.30am server time (4.30pm GMT). For example, at 10.30am (3.30 GMT) there is a $10.65 super turbo satellite with three seats guaranteed for the primate satellite – which has five seats guaranteed to the target event. In theory, it is possible to qualify for a $322.00 feature tournament for just a tenner!

So, where did all the money go yesterday? It was not on Christmas shopping, as both of yesterday´s tournaments more than doubled their advertised guarantees and produced more success for former USA Poker players who have moved to countries capable of making up their minds about online poker regulation and getting on with life.

FTOPS #25 was a heads-up PL Omaha Hi event which saw its conclusion battled out by Colorado Canadian resident Kevin -1SickDisease- Eyster and Joey MTstackin88 Spanne from California Costa Rica. Eyster proved the stronger of the two players to collect the $17,272 first prize, gold FTOPS jersey, FTOPS Champion´s gold avatar and 200 valuable points to boost him up to twelfth on the FTOPS Leaderboard competition.

32 players got paid in this tournament (the top 8 cashes are below) and, as you may know if you have been following the FTOPS series on PokerNewsReport, the bubble boy in each event gets invited back to a bouncebackability freeroll on December 22nd with a main event entry for FTOPS XXII up for grabs.

Yesterday, that unlucky bunny was Sebastian p00cket00 Sikorski, who beat Chris Moorman in the heads-up for FTOPS #11 after kindly allowing Moorman additional time to reconnect to a lousy internet connection in Prague.  Just goes to show that all good girls and boys get rewarded with something (only if it is a seat in a freeroll) and this is a fine story to tell your children and your children´s children in Christmases to come.

There was a tight finish to FTOPS #26 – the 6-Max re-buy NL Hold´em event – with, at one point the final five players separated by just 100,000 chips (12 big blinds). Included in the final five, and sporting a snazzy FTOPS winner´s gold avatar, was Brandon norajean Meyers who won FTOPS #12 on Saturday,  but it was not to be a double success for the Minnesotan Canadian whose 5♦ 5♣ could not hold against Mutha Flushaa´s A♣ K♠ and he was eliminated in fourth.

There was a little unChristmas-like animosity in the heads-up between Canadian (!) Mutha Flushaa and Costa Rican (!) swish3113 as proposed deal after proposed deal was rejected and the game was played in virtual silence. Mutha Flushaa blew the 4:1 chip advantage he had at the beginning of the event´s climax and, just before the end of Level 31 (blinds 8,000/16,000 – ante 2,000), failed to bluff swish3113 A♦ J♣ out of a 1.75 million chips pot on a Jack-high board.

In the next hand it was all over – Mutha Flushaa shoving with King high on a board which showed two pairs on the turn (Deuces and Treys) and being called by swish 3113 10♥ 8♣, who caught the 8♠ on the river to get a higher two pair.

Brandon norajean Meyers´ fourth place finish in FTOPS #26 moved him back into the Top 10 on the Leaderboard competition, but he was leap-frogged into third position by the holiday-spirited IKillU2012 – who may now be looking for a change of name as 2013 approaches. Make sure you keep up to date with all the FTOPS action and changes to the Leaderboard competition by following PokerNewsReport on Twitter.