There are only two events scheduled for Wednesday in the Full Tilt Online Poker Series, but they both promise to be exciting and potentially valuable tournaments. 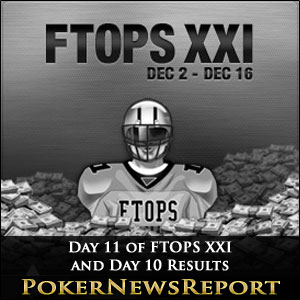 There are only two events scheduled for Wednesday in the Full Tilt Online Poker Series, but they both promise to be exciting and potentially valuable tournaments

For some, Wednesday might represent the start of the calm before the storm – with just two FTOPS tournaments scheduled for the next few days before the climax of the series takes place at the weekend – but those who rest on their virtual laurels may just find some fantastic opportunities passing them by.

It is a case of déjà vu today, as the first of the day´s events is a PL Omaha Hi tournament. However, whereas on yesterday´s schedule the event was a full-ring re-buy tournament, FTOPS #25 is a $322.00 heads-up contest. Cards will be in the air at 11.00am server time (4.00pm GMT) with no late registration available once seating has finished.

The field for FTOPS #25 is limited to a maximum of 512 with a number of seats reserved for the last minute satellites which are taking place earlier in the day. There is a $30,000 guaranteed prize pool already in place and players will receive 3,000 starting chips at the beginning of the tournament. Levels throughout the event will be 10 minutes long.

The three previous 6-Max NL Hold´em FTOPS events which have taken place so far in the series have been a fantastic success – busting their advertised guarantees and attracting fields of 806 (won last Wednesday by “ottoman09”), 981 (the return of “norajean” last Friday) and 387 (Taylor Paul wins the 6-Max $1,060 buy-in) respectively .

The $100,000 guaranteed FTOPS #26 is a $322.00 buy-in re-buy/add-on 6-Max tournament which starts at 14.00pm server time (7.00pm GMT) and allows unlimited re-buys for first four levels (one hour) each time a player´s chip stack falls below 1,500 chips. During the first break, players have the option of a 2,000 chip add-on and late registrations are available up until this point.

For those who do not have the bankrolls to race headlong into events with $322.00 buy-ins – or for those who want to extract a little value from the day´s tournaments – there are a stack of last minute satellites to the FTOPS feature events on Wednesday.

However, players should take care before entering satellites advertised as being for FTOPS #25. A number of those scheduled for this morning are targeted at the 8.00am server time/1.00pm GMT $55.00 buy-in full-table PL Omaha Hi Turbo qualifier and not for the feature tournament at all.

The cards are in the air for the primary last minute satellite to FTOPS #26 at 11.30am server time / 4.30pm GMT – a $55.00 buy-in 6-Max Turbo NL Hold´em tournament with five seats guaranteed to the feature event. However, players who bust out early may also be interested in the $10.65 buy-in Super Turbo re-buy 6-Max NL Hold´em tournament which starts 25 minutes later and has one guaranteed seat into FTOPS #26.

Between the primary last minute satellite to FTOPS #26 and the start of the tournament there are a further six qualifiers with buy-ins ranging from $26.00 to $75.00 which offer another 16 guaranteed seats to the feature event, so check out the Full Tilt Poker FTOPS Lobby to pick which one best suits your style of play and bankroll.

Day 10 – Yet Another Good Day for ex-USA Poker Players

Another busy day on the FTOPS feature tables saw more than $600,000 paid out to those who cashed in the three events – with wins going to two more online poker refugees!

If you have been following Poker News Report´s FTOPS results articles, you would be aware that we have been highlighting some of the players who were formally USA online poker players and who have moved to other countries to continue playing online poker. So it was a double déjà vu day as the first two FTOPS events on Tuesday were taken down by players formerly residing in the States.

Yesterday´s “early” game was a PL Omaha Hi Re-Buy tournament which attracted 431 players who, when they had finished dipping into their pockets for re-buys and add-ons, created a prize pool of $150,900. The tournament was won by Joshua “buttsauce33” Weizer, who added $37,725 to his lifetime online tournament cashes of more than $4 million and who players on PokerStars may know better as “bbbbb33”.

Tuesday´s highlight was a $535.00 buy-in 10-Game Mixed Poker Tournament which attracted some leading names in the world of online poker and generated a final table of six which would grace any tournament. Former FTOPS winners and SCOOP bracelet winners battled it out for the biggest slice of the $182,000 prize pool, with Dylan “InvisibleEnigma” Linde eventually overcoming the challenge of Luke “_FullFlush1_” in the heads-up.

The conclusion of the day´s action was a Super Turbo NL Hold´em Rush tournament which shattered its guarantee as 811 players paid the $216.00 buy-in (or qualified through one of the last minute satellites) to create a prize pool of $167,877. With players only getting 300 chips to start with and blinds increasing every three minutes, it only took Ukrainian player “BombOfLuck” 1½ hours to wrap up the tournament after a three-way final table deal which saw the top three players each guaranteed a minimum of $25,000.

With three well-supported events yesterday, there were plenty of points to be won for the FTOPS Leaderboard competition. Although there was significant movement around the lower half of the Top 10, there was no movement at the top – where “callyoudownn” has a slightly reduced lead over “OneUponAStar”, with “mrcall912” unchanged in third. Make sure you keep up to date with all the FTOPS action and changes to the Leaderboard competition by following PokerNewsReport on Twitter.