Davidi Kitai has won his second ever WSOP Gold Bracelet after taking the $5,000 Pot Limit Hold’em event. Kitai won $224,560 for his stellar play. 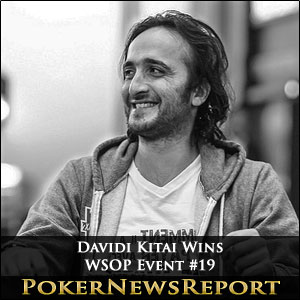 Davidi Kitai has won his second ever WSOP Gold Bracelet after taking out the $5,000 Pot Limit Hold’em event. Kitai beat a field of 195 players and won $224,560 for his stellar play.

It took just six hands for the first player to be eliminated from the final table, with Chris Johnson being knocked out by chip leader Kitai. The short stack went all in with A♠ 3♥ and was called by Kitai, who had 10♠ 10♥, which held on the board to give him the hand and send Johnson packing.

Next on the chopping block was Dario Minieri, who was knocked out by Dimitar Danchev in eighth spot. Down to his last 64,000 chips, Minieri moved all in before the flop with his K♣ 5♠ and was called by Danchev, who had A♦ 3♠. The Ace high held on the board as the one-time WSOP Gold Bracelet winner was eliminated from the event.

Bertrand Grospellier was eliminated just five hands later after he lost at the hands of Eugene Katchalov. Grospellier called Kathalov’s reraise with Q♦ J♠, which put him all in. Unfortunately for him, Katchalov showed K♥ K♣, which held up on the board to send the Frenchman out in seventh place.

Fifth place went to Kristina Holst, who was eliminated from the tournament by Vincent Bartello. Holst, who went all in with 32,000 chips, had a chance to triple up as Bartello and Cary Katz called to see the flop.

Katz folded on the turn after a reraise from Bartello, and he won the hand after hitting a pair of Aces with A♠ 8♠. Holst also had a pair of Aces, but with A♦ 3♣, she was outkicked and knocked out of the event.

Katchalov was the next player to be sent packing after Katz eliminated him in fifth spot. Katchalov called Katz’s pre flop all in with 9♣ 9♥, which was behind Katz’s Q♠ Q♥. The flop and the turn came all Spades, which gave Katz a Queen high flush and had Katchalov beat and finished.

Just six hands later, Kitai made it two for the price of one after he eliminated Bartello and Danchev in the same hand. After an initial 84,000 raise from Danchev, Bartello went all in before the flop and was called by both Danchev and Kitai.

Bartello showed A♦ Q♣, Danchev showed Q♦ 5♦ and Kitai showed 9♠ 9♦, which put him in front before a flop was shown. Kitai remained ahead after the flop came 4♦ 3♠ K♥. The 5♣ on the turn and the 7♦ on the river kept Kitai’s Nines in front and Danchev and Bartello were knocked out in fourth and third places respectively.

This left Kitai and Catz as the final two players in the event and Kitai essentially held a 2 to 1 held when heads-up play began. Catz clawed back, however, and he eventually gained the chip lead from Kitai, albeit only for a brief time.

Kitai regained the lead and would not relinquish it again as he eliminated Catz en route to winning the event. In the last hand of the tournament, the eventual winner raised to 60,000, which led Katz to reraise to 160,000. Kitai did a reraise of his own, upping the stakes to 360,000, which Katz responded by reraising pot, which was called by Kitai.

Catz showed K♣ K♠, which was ahead of Kitai’s J♣ J♦ before the flop. Things changed, however, when the flop came J♥ 6♦ 8♣, which gave Kitai a set. The 7♠ on the turn and the A♦ on the river meant that Catz was eliminated in second place and the Belgian Kitai was crown the winner of the event.