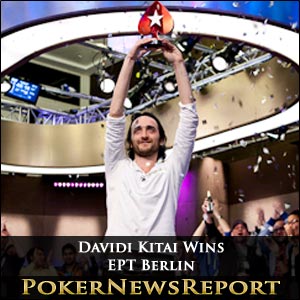 The Brussels-based pro is making a habit of Belgian poker firsts after securing his country’s debut World Series of Poker (WSOP) victory – from event #38, a $2,000 buy-in Pot-Limit Hold’em, for $244,583 – back in late June of 2009 at the 39th annual staging of the prestigious festival.

He also picked up $100,000 for taking down the 2011 World Poker Tour (WPT) Celebrity Invitational tournament during the LA Poker Classic (LAPC) in February of last year to add the second leg of his Triple Crown.

It’s actually been an incredible few weeks for Belgium after Lock Poker Pro Kevin Vandersmissen pocketed $553,316 for winning the Irish Open’s €3,200 buy-in No-Limit Hold’em main event in Dublin at the start of the month.

Kitai – who started the day as the overwhelming chip leader – ultimately beat Canadian PokerStars player Andrew Chen in their gruelling heads-up clash in the Grand Hyatt Berlin to also collect the event trophy, a $10,000-plus Shamballa bracelet, and a place at the season-closing €100,000 freeroll Tournament of Champions event on May 1 as part of the EPT Grand Final in Monte Carlo.

The champion was already top of the Belgium all-time money list on $1,784,839 – including the $649,036 he picked up for this third place finish at the EPT Barcelona main event back in September of 2008 – but extended that lead even further as he eased up to $2,726,327 in total live tournament earnings.

An obviously delighted champion – who was actually born in Antwerp – said: “It’s amazing to win. I’m feeling great. I didn’t expect to beat that field and it was a very tough final table.”

The Belgian – who scored his first live tournament win back in mid-December of 2006 when picking up $40,813 for taking down the €1,000 buy-in Euro Finals of Poker (EFOP) Gold Championship No-Limit Hold’em event in Paris – was also in the mood to party, adding: “I’m going to celebrate with all my friends in Belgium, and in France, and we’re going to celebrate in Monte Carlo for sure.”

That mention of the tiny principality is, of course, referring to the EPT Grand Final, which kicks off today with Day 1 of the €98,500+€1,500 buy-in No-Limit Hold’em Super High Roller.

While that would be a great tournament to win, Kitai will also be aiming to collect the top prize of an EPT Live Event Passport valued at €35,000 for season nine from the six-handed Tournament of Champions – which will be broadcast live on PokerStars.tv and also filmed for later broadcast.

Tournament of Champions Will Be Star-Studded

However, it won’t be easy as every previous EPT champion has been invited to the Monte Carlo Bay Hotel & Resort for the second staging of this event, meaning the likes of Grospellier, his fellow Team PokerStars Pros Jason Mercier – who pocketed $50,000-worth of EPT buy-ins for outlasting a 50-player field last year – Arnaud Mattern, Noah Boeken and Liv Boeree, as well as Mike ‘Timex’ McDonald and Galen Hall are likely to begin the event a week tomorrow.

However, let’s get back to Berlin and, in what is being described by many as the best heads-up encounter during season eight of the EPT, we witnessed some incredible play between Kitai and 24-year-old Chen – including check-raise bluffs on the river, pre-flop five-bet jams, bold all-in river calls with borderline hands, and three-bet flop bluffs.

The Belgian showed K♦ 7♥, while Chen tabled A♦ Q♥ to be in command as he put his shot at EPT glory at risk. Unfortunately, for the Canadian, the flop came K♥ 6♠ 6♦ to give Kitai top pair.

The 3♠ turn left Chen requiring one of three aces on the river to double-up, but was disappointed to see the K♥ come to hand Kitai trips and the title. However, Chen still left with $801,391 as runner-up, although he did admit that the Belgian “owned me” in their head-to-head battle at the end of five days’ tournament play.

Pratyush Buddiga Out in Eighth

The first elimination of the final day saw American Pratyush Buddiga hit the rail in eighth place for $94,127 at the hands of conqueror Bahadir Kilickeser. The German three-bet Buddiga, only for the Colorado pro to move all-in. Bremen’s Kilickeser made the call to table A♠ 10♣, but found himself dominated by Buddiga’s A♣ Q♥.

However, the 22-year-old American couldn’t improve his starting hand sufficiently on the flop, while the ten on the turn confirmed his exit – although he did pick up an additional $5,000 with his Skrill last longer success.

Englishman Marc Wright – who had led after Day 3 – was next to fall in seventh place for $126,811. The Cornwall player moved all-in on the turn with the board showing 4♦ A♦ 8♠ 10♣ against Kitai and was eventually called by the Belgian after over five minutes of consideration.

Kitai showed A♥ K♣ for top pair while 25-year-old Wright tabled Q♠ J♠ for a double gutshot straight, leaving any king or nine to double-up. The river was a blank and that elimination moved chip leader Kitai well clear of his six surviving opponents.

German PokerStars qualifier Mario Puccini notched the next knockout when eliminating Spaniard César García Dominguez in sixth for $173,874. The 23-year-old German hadn’t taken part in many hands at the final table up to this point, but certainly made his mark when his queens held against the Big Slick of the 22-year-old PokerStars player from Las Palmas.

Online poker specialist Puccini – who has $3,258,515 from internet cashes – was on a roll now and took over as chip leader not long after, although it was Chen who scored the next elimination when overcoming Kilickeser, who picked up $224,860 for fifth place.

On the button, Chen raised with Kilickeser defending his big blind pre-flop. The J♣ 8♠ 7♦ flop prompted the German to check-raise all-in with 7♣ 5♣ for bottom pair and was called by Chen, who showed K♠ J♠ for top pair. Chen’s hand held thereafter to make certain of Kilickeser’s elimination from the final table.

Another home player, André Morath, had started the final day slowly, but scored the next knockout by sending fellow German Puccini to the rail in fourth place for $287,612 after he had fallen from the dizzying heights of chip leader to the latest casualty in the space of less than one level.

Having only just doubled-up Morath, Puccini decided that enough was enough and made a stand while holding J♠ 10♥ by three-betting over the opening bet from Kitai.

PokerStars qualifier Morath was, however, the next player to fall when he took a stand after leaking chips in previous failed hands. In the big blind, the 40-year-old from Cologne moved all-in with A♥ 3♥ after button Chen had raised.

Kitai and Chen then took a dinner break – agreeing a deal that gave the latter €613,000 and the former €632,000 with an additional €80,000 to play for – before returning for their heads-up clash that eventually saw the German crowned champion.

Meanwhile, the next – and final – stop of the EPT’s eighth season arrives in Monaco today and will feature a €10,000 buy-in main event that begins on Wednesday for six days’ play that ends next Monday.