The final table in the €25,000 buy-in EPT Monaco High Rollers was set last night, with Davidi Kitai leading the field in pursuit of the €1,105,000 first prize. 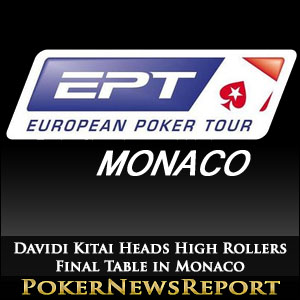 The final table in the €25,000 buy-in EPT Monaco High Rollers was set last night, with Davidi Kitai leading the field in pursuit of the €1,105,000 first prize.

Nine players remain in the EPT Monaco High Rollers after an extraordinary conclusion to Day 2, in which six players were eliminated right before the close of play – allowing several of the surviving players to make ground on the runaway leader, Davidi Kitai.

Kitai enjoyed a quite remarkable Day 2 at the tables and the early elimination of Daniel Negreanu 9♦ 9♠ > A♠ 5♠ set him up nicely to boss his table, be responsible for bursting the money bubble and winning a massive three-way pot which helped him close the day out with 2,208,000 chips.

€5 Million in the Prize Pool

After a rash of late entries and re-entries, Day 2 of the EPT Monaco High Rollers started with 109 players (from 167 unique players of which 55 had re-entered – including Davidi Kitai) – creating a prize pool of €5,243,000 which would be shared among the top 31 players.

When details of the prize pool were announced, players who had re-entered would have to do better than making a min-cash if they were to cash out of the event in profit, but for many of them the day ended long before the money bubble burst.

That´s Not a Good Start!

Re-entry Griffin Benger bust out in the first hand of the day when running his pocket Eights into Martin Finger´s pocket Queens, and he was quickly joined on the rail by two other players who had fired second bullets – Erik Seidel and Justin Bonomo.

The trend at the EPT Monaco has been for none of the world´s most famous poker players to make an impact on the feature events, and that trend continued with the eliminations of Daniel Negreanu (above), Victor Blom, Sam Trickett, Jason Mercier and Sorel Mizzi within the first four levels of play.

Igor Yaroshevskyy is the Bubble Boy

The money bubble burst after the dinner break when Davidi Kitai put pressure on the blinds of the short-stacked Igor Yaroshevskyy. Yaroshevskyy responded by shoving all-in and Davidi Kitai made the call. Yaroshevskyy was in bad shape with 8♦ 7♦ against Kitai´s A♥ 9♦ and, with both players missing the board of 3♣ J♠ 10♣ / Q♣ / J♣, the money bubble was burst, with the remaining 31 players assured of €46,150.

Up to 715,000 chips after eliminating Yaroshevskyy, Davidi Kitai was not resting on his laurels, and the former EPT Berlin Main Event winner took a substantial chip lead when his J♣ J♠ held against Alex Bilokur´s A♥ Q♠ and Benjamin Pollack´s K♥ Q♣ to bust the two players out in sixteenth and seventeenth places respectively, and take his chip stack beyond the 2 million chip barrier.

After his double KO, Davidi Kitai had almost double the chips of his nearest opponents – Philip Gruissem and Scott Seiver – with the rest of the field toiling way behind; but, in a crazy conclusion to Day 2 of the EPT Monaco High Rollers, Byron Kaverman went on a roll and bust out Calvin Anderson J♠ J♥ > A♠ 6♣, Rui Cao A♣ J♠ > A♥ 4♥, and Vasily Kylukin Q♦ 10♠ > 8♥ 5♥ to move up into second place.

Scott Seiver also got in on the act – coming from behind to eliminate Andrew Chen A♦ 7♠ > A♠ 8♠ before busting Simon Higgins 4♥ 4♠ > K♣ J♣. We also lost Noah Schwartz before the close of play – Schwartz falling to Vasily Kylukin K♦ 9♠ > 9♦ 9♥ before Kylukin was sent to the rail by Byron Kaverman.

Looking ahead to the EPT Monaco High Rollers Final Table

When the nine remaining players take their seats at the Monte Carlo Bay Hotel, the game will be entering Level 22 (blinds 12,000/24,000 – ante 3,000) and an interesting seat draw sees Scott Seiver sitting to the left of Davidi Kitai, and Byron Kaverman having position on both Martin Finger and Philipp Gruissem.