Biscardi has earned $264,351 for securing the IPT Grand Final main event at Sam Remo’s Casino Municipale after outlasting 417 other competitors. 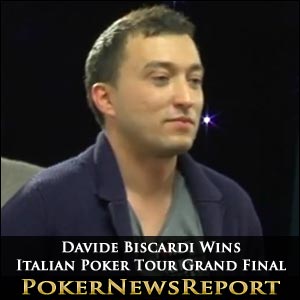 A very healthy prize pool of €810,920 ($1,071,837) was shared out among the leading 56 finishers, but it was 30-year-old [geolink href=”https://www.pokernewsreport.com/pokerstars”]PokerStars qualifier[/geolink] Biscardi who left as the champion after defeating Frenchman Philippe Clerc to leave the runner-up with $171,828 for his troubles.

With Polish player Jakub Michalak hitting the rail in third place for $107,326, it was left to Clerc and Biscardi to battle it out for the top prize, with the home favourite securing the crown during level 30, when the blinds were at 50,000/100,000 with a 10,000 ante, after controlling their head-to-head.

The final hand saw Clerc shove all-in pre-flop with 6♣ 5♥, only to be called by Biscardi, who showed the dominating A♠ 8♠. The 9♥ J♠ 8♦ flop gave the Italian middle pair and Clerc an inside straight draw. But the 4♥ turn and 6♦ river ensured that online cash game specialist Biscardi’s bigger pair held for the victory.

American pro Scott Baumstein is likely to be the most disappointed player, however, after he could only manage sixth place for $42,957 – even though he had been the chip leader during three successive days.

However, the New Yorker – who has enjoyed a fantastic start to 2012 with seven live tournament final table appearances already under his belt – could not maintain his seemingly unstoppable charge to the tour’s Season Three closing title when being knocked out by eventual champion Biscardi.

Fourth place and $80,363 went to Italian Mirko Schiano Di Tunnariello, while Sweden’s Christer Lagerstrom exited in fifth for $53,531, following on from the eliminations of Italian duo Pasquale Braco (seventh for $32,119) and Alessandro Longobardi (eighth for $21,439). Russian Igor Kurganov lifted $16,125 in ninth place, while Danish player Anders Rasmussen ($15,861) rounded out the top 10.

However, players don’t have long to wait for Season Four to kick off as the IPT pulls into Campione on May 24 for five days of action until the 28th – and one well known face is certain to be there.

Ukrainian Oleksii Kovalchuk – who picked up $226,479 for winning the IPT San Remo €2,000 buy-in No-Limit Hold’em main event at the end of January – topped the Season Three IPT leaderboard and will now be sponsored by PokerStars.it all through this upcoming fourth season. Lucky man!