American David Williams finished day one of event No.39, the $2,500 Pot-Limit Hold’em/ Omaha tournament, as chip leader at the World Series of Poker (WSOP) of 2011 in Las Vegas last night. 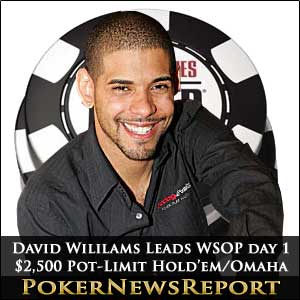 American David Williams finished day one of event No.39, the $2,500 Pot-Limit Hold’em/ Omaha tournament, as chip leader at the World Series of Poker (WSOP) of 2011 in Las Vegas last night.

Additionally, Sam Stein and Jason Somerville – who have already collected bracelets at this year’s WSOP – failed to last the opening day, as did 2011 Player of the Year front-runner Phil Hellmuth.

Williams, however, got off to a flier as he quickly moved in among the chip leaders to remain there the whole day, although he’ll have to be wary of the challenge facing him from players such as WSOP 2011 final table contestants Humberto Brenes, Adam Junglen and Bill Chen, as well as Razavi and Schock – who finished 12th in this week’s $1,000 no-limit hold’em event.

Eleven-time WSOP bracelet winner Hellmuth’s exit was dramatic. Several contestants limped into the hand, only for 46-year-old Hellmuth, in the small blind, to bet the pot. Just two opponents called, with one of them being Ohio’s Adam Junglen.

The flop came Ad-5s-4h and Wisconsin’s Hellmuth went all-in with 6,450. The second opponent followed with his own all-in and Junglen – looking ill at ease – sighed before also calling.

Hellmuth showed As-Qc-Js-10c for a pair of aces, Junglen held Ah-Qd-5c-2h to have top two pair, and the final player revealed 8c-7s-5d-4c for the bottom two pair.

The 10d arrived on the turn to put Hellmuth ahead with the top two pair, but the river was the 5h that gave Junglen a full house. A muttering Hellmuth was out, as was the other player.

Dwan, meanwhile, recorded yet another very brief appearance in an event when he crashed out quickly.

The flop fell Ah-7h-6c and the unidentified opponent placed a bet. Dwan threw in his remaining chips in and Elezra folded.

Dwan showed Kd-Ks-10h-8s, while his opponent held As-Qc-9s-5h for two aces. The 3d on the turn changed nothing, while the 2d river confirmed New Jersey native Dwan’s exit.

A total of 63 players will make the cash, with $4,480 going to the lowest-placed money winner.