EPT London was the third stop for Season 7 of the 2010 PokerStars European Poker Tour and it culminated in a very exciting Main Event. The £5,000 buy-in Main Event attracted 848 players, with 165 of them having qualified… 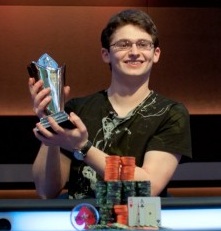 EPT London was the third stop for Season 7 of the 2010 PokerStars European Poker Tour and it culminated in a very exciting Main Event. The £5,000 buy-in Main Event attracted 848 players, with 165 of them having qualified on PokerStars, to create a prize pool of £4,112,800 with £900,000 guaranteed for the winner. Lots of big name professionals were also in town for the event including Phil Ivey, Viktor Blom (rumoured to be the infamous Isildur1), Daniel Negreanu, Jeff Lisandro, Greg Raymer, Sam Trickett and many others including former Premiership footballer Teddy Sheringham who is now sponsored by PokerStars.

When play finally got down to the final table all eyes were on popular Full Tilt Pro’s John Juanda and Tom ‘kingofcards’ Marchese.

Quickly after the final table started Tom Marchese was all-in against Per Ummer. Marchese was holding A10 while Ummer was holding KQ and the board of 109666 helped neither player giving Marchese a much needed double up and leaving Ummer with around 5 big blinds. Ummer soon open-shoved holding 53 and was called by Artur Wasek who held AQ and with a Queen on the board of Q78102 Ummer found himself as the first person eliminated from the final table to finish in 8th-place for £66,800.

Marchese was crippled again just a few hands later when he doubled-up Artur Wasek. Marchese held JJ while Wasek held QQ and the board helped neither player, leaving Marchese as the short stack and quickly after this he found himself eliminated at the hands of Vamplew. Vamplew open-shoved from the button holding 105 and Marchese snap-called with A8 to dominate his opponent preflop however the board of J5246 saw him eliminated in seventh place for £100,000 which brings his total live winnings for 2010 to around $1.8 million.

Fernando Brito was the next player to be eliminated after he let himself blind down to around 8 big-blinds and found his hand beaten by Kyle Bowker and then Kavyan Payman was eliminated in fifth place for £190,000 when his A4 failed to get help on the board against Vamplew’s QQ

Wasek was the next to go. He held 55 against John Juanda’s AJ and it was looking like he would get the double up he needed however the J on the river crushed his dreams and sent him to the rail in fourth place for a payday of £240,000.

Chip stacks were deep for all three players when play got down to three-handed and it was a big hand which saw Bowker eliminated in 3rd place for £300,000. Bowker opened the button to 350,000 and was raised by Juanda to 1 million and after a little think Bowker four-bet and was then 5-bet all-in by Juanda. Bowker called and revealed JJ to dominate Juanda’s 1010 preflop. The dealer then revealed a terrifying flop for Bowker of 5Q2 and the 3 on the turn sealed his fate giving Juanda a double-up and setting up heads-up play with David Vamplew.

After an epic 5-hour heads-up battle with the chip lead exchanging many times, the final hand came. Vamplew had Juanda crippled with only 3.4 million chips left and when Juanda pushed all-in with K2, Vamplew called with A3 hoping that his Ace-high would hold up to seal the win. It did better than hold up however, the dealer revealed a board of 3AQ96 to give 23-year old Vamplew his first major win and a life-changing £900,000 payday!

David Vamplew is a 23-year old from Scotland who has been playing poker for five years. He first started playing the game when he joined University and played part time until he graduated and then decided to take up poker full time. Amazingly prior to this huge win Vamplew’s only other recorded live tournament cash was in a $2,500 No-Limit Hold’em at the 2010 WSOP where he finished 106th for $6,071. There is no doubt we will be hearing alot more about this young pro!