Local player David Tighe flew back from the WSOP to take down the Grosvenor UK Poker Tour Main Event in Walsall after a very quick – and unusual – final table. 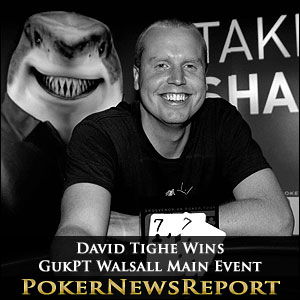 Local player David Tighe flew back from the WSOP to take down the Grosvenor UK Poker Tour Main Event in Walsall after a very quick – and unusual – final table.

The climax of the GukPT Walsall Main Event was a nail-biter from start to finish. With a final table containing several players who had recently returned from Vegas, a dual GukPT Main Event winner and a very interesting character in the form of “Mr G”, there was plenty of action during the four hours it took to find a winner of the event.

As the players took their seats for the eight-handed finale, Tim Slater and David Tighe headed the chip counts after both players had simultaneously eliminated opponents on the final table bubble. However, with blinds of 5,000/10,000 (ante 1,000), none of the remaining players were in any immediate danger.

No Third Time Lucky for Thewy

Julian Thew had previously made two final tables in GukPT Main Events – and won them both. However, it was not to be third time lucky for the Sky Poker professional, who called the post-turn shove of Charlie Denton (A-A) on a Jack-high board with pocket Queens and was bust from the tournament within twenty minutes.

Within five minutes, Mark Hestor was following Julian Thew to the Cashier´s desk, when he got all his chips in with A♥ 6♥ against David Tighe´s Q♦ J♦ – and a Jack was dealt on the flop – and then, ten minutes later, the final table was reduced to five players when Gerald Harraghy moved all-in from the Big Blind with A♥ 2♥ and was called by Mr G holding A♣ K♣. With no Deuces or Hearts among the community cards, Harraghy was eliminated in sixth.

G is for Gone

Mr G´s enhanced stack of chips lasted less than twenty minutes after he responded to Tim Slater´s post-turn bet of 65,000 chips on a board of 4-6-10 / 9 by shoving all in for 750,000 chips with pocket Aces. Tim Slater turned over pocket Nines for a turned set and – with no Ace on the river to save him – Mr G was bust out in fifth.

With the elimination if Mr G, Tim Slater had more than half the chips in play, but Charles Ihle managed a double up against the chip leader (KJ > A6) when rivering a King and, when Ihle was eventually sent to the rail in fourth (A♥ Q♥ > Q♠ 6♣ on an all Spade flop), it was Charlie Denton who appeared to be the main challenger to Slater.

However, despite starting three-handed play with the smallest stack, it was David Tighe who was to go into the Heads-Up with the chip advantage. During the next 90 minutes, Tighe chipped away at Tim Slater´s stack – forcing him out of some valuable pots with aggressive post-flop betting – and then, having taken a narrow chip lead, Tighe knocked Slater out of the Main Event in an incredible hand.

The flop of 9-7-6 gave David Tighe a set of Nines, but the Eight on the Turn gave Tim Slater a gutshot straight and put him firmly in the lead for a vital double up. Incredibly the river card was a Seven – pairing the board, giving David Tighe a Full House and eliminating Tim Slater in third.

Despite going into the Heads-Up with a 2.8 million -v- 500,000 chip disadvantage, Charlie Denton put up an extraordinary fight. A series of three-bet shoves and a hand which saw Denton double up in a Straight > Set hand forced Charlie Denton back into contention. However, David Tighe still held the chip advantage after an hour when the concluding hand of the GukPT Walsall was played.

Charlie Denton moved all-in (for about the twelfth time) with A-4 and was called by David Tighe holding pocket Sevens. The board failed to improve either player´s hand, and David Tighe was the latest GukPT champion.