Just one player was eliminated on Day 1 of the $50,000 buy-in Poker Players Championship event #45 at the World Series of Poker (WSOP) in Las Vegas. 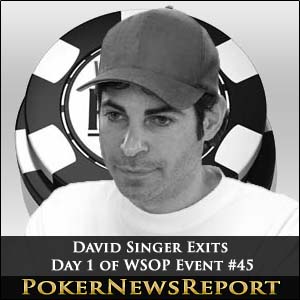 Just one player was eliminated on Day 1 of the $50,000 buy-in Poker Players Championship event #45 at the World Series of Poker (WSOP) in Las Vegas.

A total of 104 players bought in to the deepstack tournament to create a $4,992,000 prize pool so far, with David Singer – a two-time final table finisher in this event – the only player to hit the rail in what is the third successive year of this five-day competition being played as an eight-game format.

The event has been designed to really test a player’s all-round skill while also supplying deep stacks and a long blind structure to encourage maximum play. Well, that plan certainly worked on Day 1 as only Brooklyn’s Singer left the Amazon Room’s Tan Section during the opening five levels as all the players aim to collect the David ‘Chip’ Reese Trophy.

We can expect many more players to buy in, though, as registration will remain open right up until Day 2 kicks off. However, definitely returning today are the likes of former champions Brian Rast (2011), Michael ‘The Grinder’ Mizrachi (2010) and David Bach (2009), as well as ex-main event winners Phil Hellmuth (1989), Huck Seed (1996) and Doyle Brunson (1976 and 1977), and 2012 WSOP Player of the Year contenders John Monnette and Phil Ivey.

But they will all trail chip leader Matt Glantz, of Philadelphia, after he bagged up 310,700 as he aims to improve on his fifth-place finish last year. Glantz is the only player to start Day 2 with more than 300,000 chips, with Iranian Ali Eslami second on 286,900. The Los Angeles-based pro is closely followed by Alabama’s Keith Gipson (third on 281,500) and Lyle Berman (fourth on 280,300), of Minneapolis.

Day 1 was full of action, although only Singer hit the rail early in level 3. Sitting in the hijack seat with a 1,000 chip on the table, Singer saw Frenchman Bruno Fitoussi raise to 2,300, Berman call from the button and big blind Mizrachi do the same.

But, when the action came back to Singer, he made a pot-sized three-bet of 11,800, prompting Fitoussi to tank before calling. Berman and Mizrachi both folded ahead of an A♠ 5♦ 4♣ flop.

Singer then bet 17,000 and was called by Fitoussi to see the 6♠ arrive on the turn. Singer quickly checked, while Fitoussi made a pot-sized bet of 52,500 and Singer gave it some thought before shoving all-in. Fitoussi snap-called to show 9♦ 8♥ 7♠ 6♥ for the nut straight, while Singer revealed A♣ A♥ K♠ K♣ and needed an ace, five, four or six to stay alive.

However, the 8♠ river was no good to Singer, who quickly left the tournament area while Fitoussi took over as chip leader on 275,000. Unfortunately, the Parisian struggled thereafter to bag up in 26th place on 189,600.