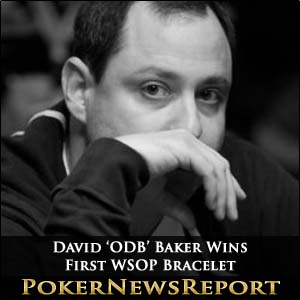 The $2,500 buy-in Eight-Game Mix event #37 was scheduled to last three days, but ultimately saw Baker earn the $271,312 top prize by defeating good friend Greg Mueller in their heads-up clash on the fourth day of this tournament.

The head-to-head started with Canadian Mueller holding a 4 to 1 chip advantage over Baker, although the latter had reduced that slightly by the time the hard-stop rule came into play – meaning the duo would have to return for that fourth day’s play.

The break seemed to work well for Baker – who is now based just outside Houston in Texas – as he battled to victory from holding just 925,000 chips to the 2,655,000 of Vancouver’s Mueller when Day 4 kicked off.

In fact, Baker was close to elimination several times at the Rio All-Suite Hotel & Casino before eventually taking the lead and holding on for his first success at the series.

Mueller did manage a small comeback, too, but Baker eventually sealed his victory during a hand of Razz that left Mueller with the consolation of adding $167,637 to his winnings, although he would not doubt have preferred a third gold bracelet.

The final hand saw both players dealt an ace, with Baker’s A♥ the bring-in and Mueller’s A♦ seeing him complete. Baker made the call and bet on the turn. Mueller called and Baker the led out on fifth. Mueller, with 315,000 total, moved all-in and the cards were tabled. Mueller eventually held 3-Q/A-8-4-Q/8, while Baker was dealt 2-10/A-6-7-3/5 – meaning the latter had clinched victory on sixth street.

‘Experience’ Was Key To Triumph

A delighted Baker – who had managed 27 previous WSOP cashes – wanted to stress that he had never given up hope of securing a gold bracelet, saying: I’ve always known that, if I just kept getting there and kept giving myself shots, I would run well late in the tournament, and that’s basically what happened.

He also reckons his years of poker involvement – including those many cashes – helped him achieve his goal, adding: Things didn’t really go my way midway through the final table. I think my experience really helped, too, when I got short. I was really confident, even though Greg had a big chip lead on me and he’s a fantastic player. I really felt that, if I could just win a couple pots early, I would have a really good chance of taking it home. So I’m thrilled.

Meanwhile, Vietnamese-born American Dung ‘Gomer’ Nguyen also collected his first WSOP bracelet – as well as $607,200 – when taking down the $1,500 buy-in No-Limit Hold’em event #38 at the Rio.

However, the Kansas part-time player – in his first WSOP cash – won’t be holding on to all of that money after being persuaded to enter the tournament by a friend who also took half his action. In fact, with $303,600 going to the champion, he’ll actually have earned less than the $377,565 picked up by runner-up Theo Tran!

Not that ‘Gomer’ will care as it seems the 37-year-old was not particularly keen on playing event #38, but was convinced after his friend suggested he ought to, prompting Nguyen to say that maybe it was just destiny that he should win the top prize.

He added: Coming in after the first day’s dinner break, I only had 4,000. I thought I was done. But I doubled-up three times in a row and then that’s it, it was all from there. Everything just felt right.

Scott Clements Out in 10th

New York State’s Matthew Pierce had started the day with a healthy stack but bust out in 11th place for $34,927, before short stack Scott Clements, of Vegas, hit the rail in 10th for $34,927 to create the nine-handed official final table.

Nguyen entered his heads-up clash with Vegas-based Tran holding almost three-quarters of the chips in play and was never seriously troubled as he forged ahead to victory.

The last hand actually saw Pennsylvania’s Tran – who shoved all-in pre-flop for the very first time – in great shape with his A♠ K♦ against the Q♥ 10♠ of Nguyen. The 8♦ 4♠ 3♦ flop was great for Tran, too, keeping him ahead. However, with Nguyen’s rail calling for a queen, the 10♦ arrived to still give Nguyen the lead.

Tran was in trouble, but still held outs to a diamond flush, while any ace or king would also see him double-up. But the J♣ came on the river to ensure that Nguyen’s supporters charged the stage to celebrate with the new champion.