David Diaz has been banned from this year’s WSOP for behaviour he displayed at the Rio All Suite Hotel and Casino, which is playing host to this year’s event. 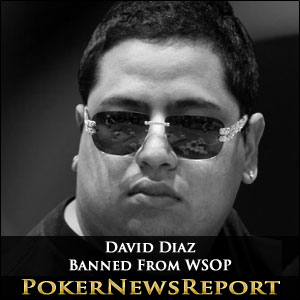 Poker professional David Diaz has been banned from this year’s WSOP for behaviour he displayed at the Rio All Suite Hotel and Casino, which is playing host to this year’s event.

The winner of the $1,500 Triple-Chance No-Limit Hold’em Championship at the 2011 WSOP, it is believed Diaz has been banned from the Rio and all other properties owned and run by Caesars. The ban relates to a situation where Diaz was under the influence of alcohol and disturbing other patrons of the Rio.

Diaz confirmed the banning on his Twitter account, saying that he was made aware of his blacklisting during a WSOP event, believed to be event #21, which came to a close last night.

looks like I’m kicked out of all Harrah’s (now known as Caesars) property’s right before dinner break with a 100bb… no main event this year.

because I was so drunk and harassing people at carnival court the other night but I don’t remember any of this.

After a day to think about his actions and to let the ban sink in, Diaz again took to poker to express his thoughts on the situation. On Thursday, Diaz expressed his remorse over his behaviour that led to his subsequent banning from the WSOP.

I would like to apologize to Harrahs, my friends, and to anyone my actions may have affected negatively,

I made a mistake and plan to do everything in my power to make it right and take the proper steps so that nothing like this will ever happen again.

A number of fellow poker professionals took to Twitter to support Diaz after he posted details of the ban on the social network. This year’s WSOP $1,000 No Limit Hold’em (Event #7) winner Matt Waxman called on Caesars to reconsider their ban on Diaz. Waxman tweeted

I hope Diaz is kidding! Banned from Harrah’s property?! The Rio needs this guy!

We all get drunk sometimes. This is one of the nicest guys in poker and [he] deserves another chance,

Diaz’s buy-in for Event #21 was refunded to him by the WSOP following his ban. Besides his recent ban and 2011 WSOP Gold Bracelet win, Diaz is perhaps known in the poker world for his story of being a childhood cancer survivor.

It is currently unclear how long Diaz’s ban will last.