David DeNoon won Event #14 of the Borgata Fall Poker Open to collect his first Borgata trophy and $18,334 prize after leading the field for most of the day. 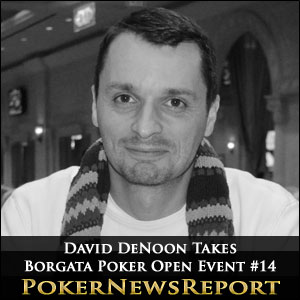 David DeNoon won Event #14 of the Borgata Fall Poker Open to collect his first Borgata trophy and $18,334 prize after leading the field for most of the day.

While Day 2 of the Borgata Fall Poker Open Championship was continuing, there was an opportunity for everybody who had bust out from the primary event to compete in an alternative “Main Event” – the $350.00 + $50.00 “Big Stack” NL Hold´em re-entry Event #14.

Players started with 15,000 chips in this one-day tournament, which had 30 minute levels and late registration/re-entry available for six levels. When late registration closed, a total of 180 entries had been received, creating a prize pool of $63,000 which would be shared out among the final eighteen players.

David DeNoon was the early pacesetter, and he still led the field when the money bubble burst around 10.00pm, and when the Final Table was set thirty minutes later:

Final Table Down to Four Within Two Levels

It was no surprise to see Duane McClure leave the table first, but the quick eliminations of Scott Russell in ninth and Svetlana Gromenkova in eighth came as a bit of a shock. Michael Khiyayev (seventh), Barry Davidowitz (sixth) and Al Mottur (fifth) were sent to the rail in a crazy fifteen minute period – after which David DeNoon still held the chip lead (with 1.16 million chips), but was closely pursued by Jordan Ludwick (1.05 million chips), with Ilya Vasserman (300,000 chips) and Mike Caruso (250,000 chips) just about hanging on.

Vasserman Saved by the River

Jordan Ludwick briefly took the chip lead when busting out Event #11 winner Mike Caruso Ace-Nine > Jack-Seven, but two double-ups by Ilya Vasserman – Ace-Four > pocket Deuces and Ace-Queen > pocket Deuces – knocked Ludwick off the top of the leaderboard, and he was crippled in an incredible hand in which David DeNoon was two cards away from a dual KO to win the event.

The K♥ on the Turn made Ludwick´s straight, and it looked as if Ilya Vasserman was heading for the rail, but the A♠ spiked on the River – tripling up Vasserman (now 1.8 million chips), knocking David DeNoon down to 660,000 chips and crippling Jordan Ludwick (< 200,000 chips with blinds of 12K/24K – ante 3K).

Ludwick Out as DeNoon Takes Back Advantage and Wins

Jordan Ludwick was bust out of the Borgata Fall Poker Open Event #14 in the very next hand. Again it was a three-way pre-flop all-in, with Jordan Ludwig (King-Ten) well behind the Ace-Five of Ilya Vasserman and Ace-King of David DeNoon. DeNoon hit the Ace on the flop to take back the chip lead and take a 1.7 million -v- 1.1 million chip advantage into the heads-up.

The heads-up climax to the Borgata Fall Poker Open took nearly two hours to resolve – with both players each taking substantial chip advantages, but failing to kill the game off. The final hand occurred when Ilya Vasserman moved all-in pre-flop with K♠ J♠ and was called by David DeNoon who also had a suited combination A♥ 9♥. DeNoon was ahead pre-flop, and after his Nine paired on the flop. His hand improved to two pairs when an Ace was dealt on the River and David DeNoon won his first Borgata Poker Open trophy and the first place prize money of $18,334.