David-Clifton-Burraway heads the six remaining players in the UKIPT Nottingham Main Event in pursuit of the prestigious title and the £100,000 first prize. 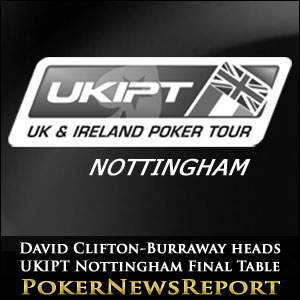 David-Clifton-Burraway heads the six remaining players in the UKIPT Nottingham Main Event in pursuit of the prestigious title and the £100,000 first prize.

The final table of the PokerStars-sponsored UKIPT Nottingham Main Event will conclude this afternoon at the Dusk Till Dawn Poker Club in Nottingham, with David Clifton-Burraway holding a narrow chip advantage over his five rivals.

Clifton-Burraway was the only player to finish the day with a chip stack in excess of 2 million chips, but four of his rivals have healthy stacks in excess of one million chips, while the shortest-stacked of the remaining players – Tim Wong – still has fifteen Big Blinds to play with.

Day 2 of the UKIPT Nottingham resumed with 31 players, and Chris Brammer holding a narrow chip advantage over Tim Wong and Tony Salmon. There was no lack of early action – Sergio Aido shooting into the chip lead with victory in a massive pot against John Eames (4♥ 4♠ > A♣ 10♠ after a flop of 9♣ 4♣ K♣) and Ben Vinson busting out Simon Deadman K♦ 10♠ > K♠ 8♣) – and, soon after the first break, just eighteen players remained.

Sergio Aido continued his good run when his Ace-King hit an Ace on the flop to bust out Viktor Leonon (pocket Nines), but he was stopped from running away with the UKIPT Nottingham Main Event when Ben Mayhew moved all-in with A♥ 10♦ against Aido´s A♠ K♥ and found four diamonds on the board to complete his Flush.

David Clifton-Burraway (Q♠ Q♥) flopped a set of Queens to eliminate Abhishek Khaitan (Q♣ 9♣) and keep tabs on the chip leaders, and soon after Tony Salmon (A♥ 10♥) sent Joe Laming (J♥ 9♥) to the rail to reduce the field to twelve within four levels of play.

The pace of the action slowed down once the UKIPT Nottingham Main Event reached its final two tables. Ganesh Jayaraman improved his chances of reaching the final table when busting out Adam Forsyth Jacks > Sixes, but a rivered straight by Tony Salmon knocked Jayaraman´s stack back down to around 500,000 chips.

Tony Salmon was also responsible for knocking out James Sykes in eleventh place A♣ Q♣ > J♠ J♥ (Salmon rivered trip Queens), but Ben Vinson survived two all-in shoves when the game was ten-handed – the second against Sergio Aido (A♣ K♥ > J♦ 9♦), who missed a stack of outs on a board of 8♥ K♣ 6♦ / 5♦.

Following the River card 7♦, Clifton-Burraway moved 500,000 chips into the middle of the table. Tony Salmon got out of the way, but Chris Brammer deliberated his decision for seven minutes before making the call. Eventually he decided to call the bet – but David Clifton-Burraway turned over K♠ 7♣ for a rivered Full House, while Brammer just winced and threw his cards into the muck. With victory in that hand, Clifton-Burraway moved up to just short of 3 million chips, while Brammer was cut down to just 393,000 chips.

Not All One-Way Traffic as Field Reduces to Six

David Clifton-Burraway finished off Chris Brammer to eliminate him in eighth place 5♥ 5♠> 10♦ 9♦ after Tony Salmon had bust Ganesh Jayaraman in ninth Q♥ Q♠ > A♥ K♠ and Sergio Aido had sent David Price to the rail in tenth place (Aido´s paired Jack > Price´s A♦ 8♦) but, Clifton-Burraway was soon to see his chip stack eaten away.

Sergio Aido took ½ million chips from Clifton-Burraway when flopping top pair top kicker, and Ben Mayhew got a valuable double-up when his pocket Fours held against Clifton-Burraway´s A♣ 5♠. The chip leader must have been mighty glad when Ben Vinson (A♠ Q♠) turned a Queen to bust Richard Lawlor (8♣ 8♥) out in seventh to set the final table, as it will give him a chance to reflect on the big chip lead he relinquished and how to approach the final table.

Although David Clifton-Burraway still has the chip lead, you can expect some fireworks from the habitually aggressive Sergio Aido in pursuit of his second UKIPT Main Event title, while Tony Salmon seems to be hitting the right cards at the right time and the two Bens (Mayhew and Salmon) do not seem apprehensive about getting involved in big pots.