Boyaciyan plucked a home victory out of the air as the last Dutchman standing became the only main standing in the Masters Classics of Poker Main Event in Amsterdam. 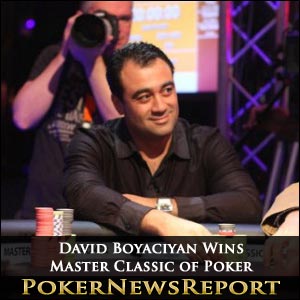 David Boyaciyan plucked a home victory out of the air as the last Dutchman standing became the only man standing in the Masters Classics of Poker Main Event in Amsterdam over the weekend.

Having seen six of his compatriots eliminated from the tournament as the field was reduced from sixteen to the final table of nine on Friday, a Dutch victory seemed unlikely behind the monster chip stack of Finnish poker player Jussi Nevanlinna. However, after an astonishing piece of good fortune in the opening hands, a come-from-behind double up against the chip leader and an incredible conclusion, David Boyaciyan claimed the title and €382,200 first prize.

At the conclusion of Friday´s play, the Masters Classics of Poker seemed destined for Finland. Jussi Nevanlinna had demolished much of the field to claim a massive chip advantage over American Athanasios Polychronopoulos and have a chip stack nearly four times bigger than third placed Victor Wessman. Blinds started on Saturday at 15,000/30,000 with a 3,000 ante, and with seven of the nine players having a chip stack below average!

Nevanlinna Involved from the Start

Just as on Friday, Jussi Nevanlinni took the bit between the teeth and led the action, however this time it had the opposite effect. First he shipped chips to Polychronopoulos when the American rivered a straight and then chipped up Joe Ebanks, when Ebanks´ K♣  K♠ held against the Finn´s Q♦ J♥. Soon after, David Boyaciyan experienced his first piece of good luck when he called the shove of Canadian JP Bertozzi.

Boyaciyan was the aggressor in the hand which saw the departure of Bertozzi. Shoving all-in from the cut-off with A♣ 10♥, Bertozzi called with the superior A♠ J♣. the flop of 8♠ 10♠ J♦ and turn of 5♠ gave Bertozzi top pair and possibilities of the spade flush, but the 10♦ on the river eliminated the Canadian from the tournament and chipped Boyaciyan up into fourth position.

Short Stacks Depart and Ebanks Too!

As the blinds rose to 20K/40K with 4K ante, the short stacked players started to become more desperate. Keven Stammen (A♣ 9♥) came from behind to bust Makarios Avramidis (A♠ 10♥), while Jussi Nevanlinna´s paired Ace was enough to dispatch David Peters and extend his lead again at the top of the leaderboard. It was a lead he increased even further when his 6♣ 7♣ hit two pairs on the board to crack Joe Ebanks A♣ A♠, and the Finn took his chip stack to over 5 million – more than half the chips in play – when eliminating Keven Stammen in a A♥ 6♣ -v- A♦ 2♦ race.

While this flurry of activity had been occurring, David Boyaciyan had seen his chip stack slip to around 500,000. Two valuable uncontested pots against Athanasios Polychronopoulos and Victor Wessman had seen him climb up to almost a million chips, but he was still the short-stack of the remaining four players. Shoving with A♥ 7♦, he was snap-called by Polychronopoulos (A♣ K♣) and was not out of trouble when the flop fell 7♠ 8♠ 2♦. Fortunately the flop was followed by Q♥ Q♦ to give Boyaciyan a much needed double up and demoted Polychronopoulos to short stack.

Athanasios Polychronopoulos was soon to be in trouble when Victor Wessman paired his Jacks to take another chunk out of the American´s stack, and the overnight second-placed player was busted by Jussi Nevanlinna´s pocket Kings a few hands later. A big, big, double with A♠ K♠ -v- A♥ Q♣ allowed David Boyaciyan to almost catch the chip leader, and he indeed took the chip lead from the big Finn when his own Kings eliminated Victor Wessman (A♥ 10♣) in third.

Going into the Heads-Up, David Boyaciyan´s lead was just ten big blinds (blinds now 50K/100K – ante 10K) but he extended it to 6.6 million –v- 2.5 million when forcing Nevanlinna out of a 2 million chip pot on the river. Nevanlinna grabbed the lead momentarily when doubling up with Eights over Kings, but Boyaciyan fought back by jamming all-in on a flop of Q♦ 2♦ 10♣ to take a slight advantage.  The penultimate hand of the day was astonishing.

With both players evenly matched, Boyaciyan raised to 375K. Nevanlinna three-bet to 900,000 and Boyaciyan four-bet to 2,075,000 which prompted a shove from the Finn. Boyaciyan called and was in front as the two players put their cards on the table:-

The cheering of the home supporters was suddenly muted as the flop came down Q♠ 9♦ 2♠ and little hope was left after the 10♦ on the turn. Incredibly the J♦ on the river completed Boyaciyan´s draw and with only one big blind left, Nevanlinna was crushed.

Nevanlinna´s tournament was over in the very next hand as Boyaciyan turned a flush to claim victory in front of a disbelieving crowd at the Holland Casino and collect the winner´s cheque and tournament trophy.

A truly memorable encounter left David Boyaciyan €382,200 richer, with the defeated Finn licking his wounds with a cheque for €227,850. The rest of the final table payouts looked like this:-