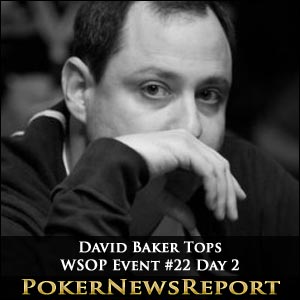 British Columbia’s Buchanan – despite having won more than $1.6 million in WSOP earnings during the previous two years – will be aiming to collect his first bracelet, while Baker, with a little over $1 million in series earnings, is also missing that sought-after piece of jewellery.

Will Baker finally be able to bag a title after making five final tables and cashing in 25 events? We shall find out later today.

However, both these players will have to overcome a trio of multiple bracelet winners, with Flack (seven), Farzad Bonyadi (three), of Los Angeles, and Georgia’s Josh Arieh (two) – who is the short stack with just 22,000 chips – knowing what is required to win a WSOP title.

One woman, California’s Von Altizer, will be seated today with the aim of collecting a bracelet. But Von Altizer, whose only cash in the series came when she took 21st in this same event back in 2008 for $5,474, will struggle to last more than a few hands as she only has 77,000 chips after Baker crippled her on the last hand of Day 2.

Day 2 started with 79 players, with the first 50 hitting the rail quickly and the money bubble bursting to allow 24th placed Alex Balandin, of Brooklyn, to collect $4,782.

The list of pros to bust before the money bubble was huge, but included the likes of Abe Mosseri, Marvin Rettenmaier, Huck Seed, Owais Ahmed, Tex Barch and Brian Hastings.

Day 1 saw the field cut down from 228 starters – who created a prize pool of $518,700 – to 79 survivors, with the likes of Andy Bloch, Daniel Negreanu, David ‘Viffer’ Peat, Vannesa Selbst, Shaun Deeb and Doyle and Todd Brunson hitting the rail without cashing.