David ‘Bakes’ Baker beat the twin titans of Phil Ivey and Phil Hellmuth to take down event #32 at the World Series of Poker (WSOP) in Las Vegas. 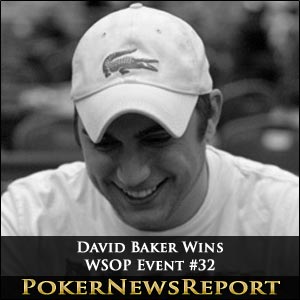 David ‘Bakes’ Baker beat the twin titans of Phil Ivey and Phil Hellmuth to take down event #32 at the World Series of Poker (WSOP) in Las Vegas.

In what was a fantastic end to the $10,000 buy-in H.O.R.S.E. Poker tournament, Michigan’s Baker was crowned the champion by defeating John Monnette, of California, heads-up for the gold bracelet and $451,779 – with Hellmuth missing out a 13th crown when exiting in fourth for $134,056, not long after eight-time WSOP winner Ivey had been eliminated in fifth for $99,739.

Yet another Vegas pro, Mori Eskandani, made the ‘unofficial’ final table, but hit the rail in ninth place for $35,923, while the first to exit when play became eight-handed – during a round of Stud Eight-or-Better – was Maryland’s Dan Kelly (USA) for $45,360.

Florida duo Abe Mosseri (sixth for $75,511) and Matt Waxman (seventh for $58,093) were the next two players to exit, leaving the final table five-handed.

Ivey and Hellmuth were then eliminated in fifth and fourth respectively, with the former losing out to Monnette during a hand of Razz to pick up $99,739 and the latter cashing for $134,056 when also losing out to the start-of-day chip leader while playing Omaha Eight-or-Better.

John Monnette On A Roll

Monnette was on a charge now and scored a third successive elimination when sending Toronto’s Paul Sokoloff to the rail in third spot for $183,784. The Toronto pro was all-in during a hand of Hold’em but saw his A♦ 9♣ outdrawn by the 7♣ 6♠ of Monnette.

It took 90 minutes for the champion to be crowned during a hand of Stud, with the victory really being secured on the previous hand. With Baker starting off with (x)(x)/5♣ Q♣ J♥ 9♥/(x) and Monnette holding (x)(x)/2♥ Q♦ J♣ A♥/(x), the latter bought in and the former completed.

Monnette called and Baker led out on fourth and fifth street, with Monnette calling both bets. Monnette had a better board after sixth, so check-called bets on sixth and seventh streets. Baker showed J♠ 9♠ 7♥ for nines and jacks, prompting Monnette to muck his hand as his stack hit a lowly 150,000 chips.

Monnette – who left with $279,206 as runner-up – has now finished in first, second and third in events at this year’s series, ensuring he now tops the WSOP Player of the Year leaderboard on 524.25 points.

However, Ivey is not far behind in second place on 494.70, while Andrew Frankenberger fills third on 384.66 and Hellmuth climbs five places into fourth on Phil Hellmuth on 368.70. Baker’s win also boosts his chances of the claiming the title as he now sits in sixth place on 292.50 points.