The burgeoning Punta Cana Poker Classic (PCPC) is certain of carrying a little more glamour next week with the news that Dave ‘The Devilfish’ Ulliott will take part in the $1,500+$150 main event. 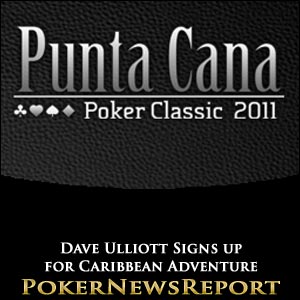 The burgeoning Punta Cana Poker Classic (PCPC) is certain of carrying a little more glamour next week with the news that Dave ‘The Devilfish’ Ulliott will take part in the $1,500+$150 main event.

Organisers of the second annual PCPC were “thrilled” to announce that the 57-year-old Englishman would be attending the guaranteed $500,000 prize pool event in the Dominican Republic that runs from November 7 to 12 at the extravagant Hard Rock Hotel and Casino.

As the 1997 World Series of Poker (WSOP) $2,000 pot limit Texas Hold’em event bracelet winner, Ulliott brings an added measure of prestige to the event, as well as a little tension no doubt due to his bad boy reputation.

A representative for the PCPC reckons the arrival of Ulliott proves the growing drawing power of the tournament and said: “He’s a great figure to come and play our event, and we are thrilled to have him. We’re seeing a growing interest from celebrities and major poker players as the event continues to grow.”

Certainly, there is rarely a dull moment when Ulliott is playing, with his reputation as an unpredictable pro who may appear calm and collected but can suddenly – and without warning – make some hyper-aggressive moves.

Additionally, whenever the Hull-born Ulliott is present, there is a noticeable increase in the tension and excitement at a table, possibly due to his checkered past, when he gathered something of a reputation as a minor criminal as a young lad because of his stint in prison for safe-cracking and burglary.

Now, however, he is more likely to snaffle an opponent’s chips through skill, determination and unpredictability, although his renown as a tough guy does tend to intimidate some of the weaker players.

Ulliott has, of course, won millions playing professional poker but still retains something of his Jack The Lad image, and said that he is “expecting some nice weather, nice ladies, and a band so I can play along”.

But it’s also to be assumed that the poker legend will be aiming to boost his bank balance with a victory in the Caribbean.

There is still time to line up alongside Ulliott at the PCPC with packages still available at puntacanapokerclassic.com. Additional information on the event can also be found at the official website.