Legendary English pro Dave ‘The Devilfish’ Ulliott’s most recent book regarding his life as a poker player looks like being made into a movie, if his agency, Poker Icons, is to be believed. 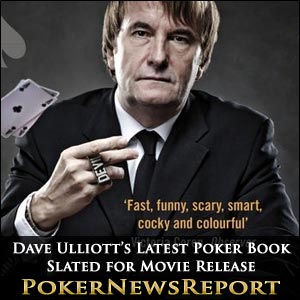 Legendary English pro Dave ‘The Devilfish’ Ulliott’s most recent book regarding his life as a poker player looks like being made into a movie, if his agency, Poker Icons, is to be believed.

The tome, called The Life and Times of a Poker Legend, highlights Ulliott’s highs and lows during his time as a pro gambler and will surely thrill all his many fans.

After joining the agency, Ulliott spoke of his hopes for the future, pointing out: “Since I wanted to be able to focus on my game, I am letting the major poker agency Poker Icons handle all my professional needs outside the felt”. They certainly seem to be doing well by the star, if the movie gets made, of course.

The 57-year-old’s reign as the leading British player for career winnings came to an end last week when Nottinghamshire’s Sam Trickett surpassed his total of over $6million by winning the Partouche Poker Tour (PPT) main event in Cannes for €1million.

Trickett now sits on about $6.5million, while Ulliott has $6,006,899 and Triple Crown winner Roland de Wolfe, of London, is third on $5,330,556. However, the Hull star is still regarded as one of the greatest poker players of all time. The Devilfish secured a World Series of Poker (WSOP) bracelet back in 1997 when winning $180,310 for taking down event #9, a $2,000 Pot-Limit Hold’em tournament, and also has a World Poker Tour (WPT) title and $589,175 from his success in the 2003 Jack Binion World Poker Open when beating Phil Ivey in a heads-up battle.

Ulliott has also appeared on numerous television poker shows, such as Late Night Poker and the PartyPoker Premier League.

Following in the Footsteps of Adrienne Rowsome

Staying with the big screen (sort of), Canadian Adrienne ‘talonchick’ Rowsome is just the latest in a succession of Team PokerStars Online to have a movie made about her life. The Edmonton player, who became a Team PokerStars member back in July of last year, will feature is a short documentary that takes a look at her career as a poker pro. Rowsome’s story should be interesting as she is the sole female member of the PokerStars Online team and is in fact not a full-time pro as she earns a living from her job as an occupational therapist.

Now nine years into her career as a therapist, Rowsome most definitely considers playing poker as a side venture. She said: “I love my job – it gives me meaning and it’s important to me in my life that I’m able to help people.”

While she puts in almost 40 hours a week as a therapist, Rowsome does still find time to get online at PokerStars to earn a little extra cash that has allowed her to put a down payment on a house and buy her dream car.

Rowsome, who is thrilled to take part in the documentary, added: “I take great pride in my jobs, whether it is taking care of patients or representing PokerStars.”

Representing women very well in poker, Rowsome has made five final tables in the recently-added Women’s Sunday tournament at PokerStars and hopes that the movie will encourage other females to take up the game.

She concluded by saying: “I love that PokerStars provides a tournament like this as well as offering different incentives to welcome female players to the site.”

We at PokerNewsReport are certainly keen to see this short movie. It should make for very interesting viewing.