Dave Shallow and Richard Kellett split the money in the UKIPT High Rollers, with Shallow taking home the winner´s trophy by virtue of his superior chip stack. 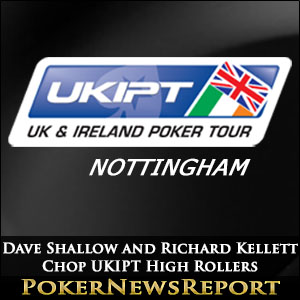 Dave Shallow and Richard Kellett split the money in the UKIPT High Rollers, with Shallow taking home the winner´s trophy by virtue of his superior chip stack.

There was an unscheduled conclusion to the UKIPT Nottingham High Rollers yesterday, when the two players due to contest the heads-up conclusion to the event – Dave Shallow and Richard Kellett – decided to chop the prize money and have an early night.

Dave Shallow was awarded the winner´s trophy because, at the time the deal was made, he held a 1,082,000 -v- 937,000 chip advantage over his opponent; but possibly the happiest player at the Dusk till Dawn club in Nottingham was third-placed Eleanor Gudger – who entered the event via a last-minute satellite at the club, and finished third for her largest ever live poker cash of £36,950.

The £3,300 buy-in UKIPT Nottingham High Rollers event had attracted 101 entries (86 entries and 15 re-entries) during Day 1, and thirty-five players returned for the conclusion to the tournament – with only thirteen due to cash.

The money bubble burst shortly before 4.00pm, when Matt Davenport (A♣ 10♣) responded to Andrew Hulme´s (Q♦ Q♠) three-bet by shoving all-in and catching the A♠ on the flop to eliminate Hulme empty-handed.  One hour and four eliminations later the final table was set:

The Early Departures see Kellett Ahead

With blinds of 2,000/4,000 (ante 500) when the final table got underway, John Haigh was the player most under pressure, and he was the first to bust after Dave Swallow flopped a set of Eights to best Haigh´s paired K♠ 3♠. Eleanor Gudger and David La Ronde both got valuable double-ups in the next level of play, and it was Steve Warburton who was to depart the UKIPT Nottingham High Rollers in eighth place after running his pocket Sixes into Richard Kellett´s pocket Nines and failing to improve his hand.

More doubling up from Gudger (A♣ 9♠ > Dave Shallow´s 2♠ 2♣) and Patryk Slusarek (Q♣ Q♥ > Matt Davenport´s A♠ K♠) saw the balance of power change, and Mo Sadiq became the next player to bust, when his K♣ 9♠ failed to connect with the board against Eleanor Gudger´s A♠ 10♣. Richard Kellett then took control of more than half the chips in play when eliminating Patryk Slusarek in sixth place 9♠ 9♣ > A♦ Q♥ and David La Ronde in fifth place A♠ 4♠ > 6♥ 4♥.

Shallow Battles Back to Gain Advantage

When four-handed play got underway, Dave Shallow went on a roll. Within thirty minutes he bust the short-stacked Matt Davenport in fourth place, doubled-up against Richard Kellett 7♣ 7♦ > 5♠ 5♦ (when both players improved to a set), and eliminated Eleanor Gudger in third place J♣ 8♣ > A♠ K♣ when flopping two pairs.

After ten hours of poker, both Dave Shallow and Richard Kellett felt that enough was enough, and they decided to split the remaining prize money down the middle. Shallow explained his reasoning for accepting the deal as both players were well-stacked (each had approximately 100 big blinds) and both were getting pretty tired ahead of what may be a four-day run in the UKIPT Nottingham Main Event