Dave Meagher took down the first of the Black Chip Bounty Tournaments at the Borgata Fall Poker Open (Event #2) for $34,196 and a further $1,000 in bounties. 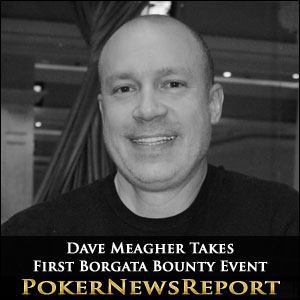 Dave Meagher took down the first of the Black Chip Bounty Tournaments at the Borgata Fall Poker Open (Event #2) for $34,196 and a further $1,000 in bounties.

Event #2 of the Borgata Fall Poker Open was a KO tournament with a buy-in of $400.00 plus a $100.00 bounty which attracted 373 players and created a prize pool of $130,550. A lot of players jumped into this event after being bust from the $1 million Deepstacks Event #1, including the winner – Dave Meagher – who described busting out of the opening tournament as a “blessing”, as it allowed him to compete in the bounty event.

Meagher also confessed to enjoying some good fortune earlier in the day, as he had collected one of his bounties by hitting a runner-runner flush when all in for his tournament life with King-Ten against the Ace-King of Alexander Gentile. Gentile, who was bust out in eighteenth place shortly after for $1,803, was one of the first players to congratulate Dave Meagher after his victory – commenting “Glad to see you put my chips to good use”.

Other than the one hand against Gentile, Dave Meagher admitted to having an “easy tournament” and said that he did not experience a great deal of volatility with his chips throughout the day. Indeed, many of the players on the final table seemed to enjoy the experience more than you would expect; with final table chip leader Alex Faynkikh (who eventually finished in fourth place) adding “It was a good time, a blast”.

Runner-up Charles Furey picked up the most bounties in the event (twelve) and was supported throughout the final table by colleagues in the Albany Poker League. “A group of us came down and we´ll be grinding the next few weeks” said Furey, and his team have already enjoyed success – not just with Furey´s second place cash of $18,995 plus $1,200 in bounties, but also due to team members Hani Khalil (20th place for $5,882) and Aaron Teeter (33rd Place for $4,972) enjoying deep runs in the opening event.

Of the 373 players that took part in the $350.00 + $50.00 + $100.00 Black Chip Bounty Event #2, thirty-six players cashed in the tournament. A min-cash was worth $785.00 plus the bounties that the players had collected along the way, and the ten players who reached the final table each collected the following amounts: