Blackpool’s Dave Garden has seen off a high-quality field to secure the Palm Beach Big Game in London. 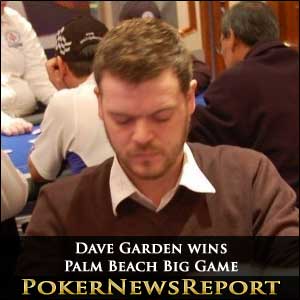 Blackpool’s Dave Garden has seen off a high-quality field to secure the Palm Beach Big Game in London.

Dave Garden lined up alongside 85 other competitors for the £1,000 No-Limit Texas Hold’em Freezout event, and could have been forgiven for panicking – even just a little – when he saw players such as Nik Persaud, Joe Beevers, Daiva Barauskaite, James Akenhead, Karl Mahrenholz, the Boatmen brothers Barney and Ross, Toby Lewis, Neil Channing and Richard Ashby begin the tournament.

However, Garden outlasted them all in what is becoming a favourite tournament among British pros to eventually defeat Canadian Matt Novak in heads-up play to leave with the £30,100 first prize.

Garden’s previous best finish had been a fourth place in the £50 No-Limit Hold’em event at Nottingham’s Virgin Poker festival back in June of 2008, while his biggest pay day before this was the £1,050 he picked up for placing 10th in the £500 No-Limit Hold’em main event of the Coral British Masters Poker Tour in Teesside in July of 2009.

The champion had won his Palm Beach Big Game seat by taking the Last Longest Promotion at the Blackpool MegaStack #7, while Scotsman Sinclair – who finished third for £12,040 – won his seat by triumphing at May’s Las Vegas Team Challenge II Live Final, and ninth-placed finisher Callum Noble was awarded his place after winning the Last Longest promotion at Liverpool MegaStack #2.