More than 1,000 players hit the rail on Day 3 of the Main Event, leaving 720 still alive and nearing the money finish of the top 666 players. 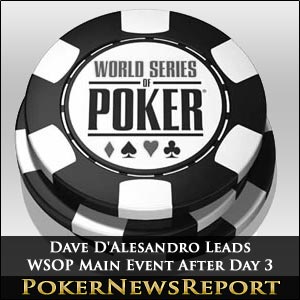 More than 1,000 players hit the rail on Day 3 of the Main Event, leaving 720 still alive and nearing the money finish of the top 666 players.

A day of aggressive play and massive pots allowed some players to take commanding chip leads, such as Dave “doubledave22” D’Alesandro, who is ahead of the field with a chip stack of 1.1 million. The online pro has cashed over $1 million in Internet tournament winnings and is looking for an even bigger payday in the Main Event.

Last year’s Main Event champ, Pius Heinz, won’t be duplicating the feat, getting knocked out when his pocket 6’s ran into Gioang Nguyen’s A-A. Other former Main Event winners joining Heinz in the railbird section include Dan Harrington, Jerry Yang, Robert Varkonyi and Peter Eastgate. “Action Dan” Harrington almost survived the third day but was eliminated just a few hands prior to bagging chips when his big slick couldn’t catch versus the pocket Jacks of Evan Jarvis. Two former Main Event champs remain in the tournament, Johnny Chan and Huck Seed. Chan ended the day with 374,000 chips after having only 42,000 at one point. Seed’s quest for a second title will be uphill all the way, with 115,000 chips to his credit, far below the average stack of 275,000.

The day began with five 2011 Main Event final tablists still in contention, but ended with two less, as Ben Lamb was eliminated by Chris Moorman and can commiserate with Heinz about the glory of last year’s final table. Lamb was named the 2011 WSOP Player of the Year, but didn’t cash in any WSOP events this year. Eoghan O’Dea, Phil Collins and Sam Holden are still in the running to land at the final table in consecutive seasons.

Day 3 success stories include Sorel Mizzi, who sat down at noon with 90,000 chips and bagged 738,000, good for 15th place. Vanessa Selbst went from 520,000 to 814,000 chips in the final three hours of play, spurred on by hitting a flush on the river to overcome a flopped set. She sits in 10th place on the chip leaderboard in her quest to become the second woman to ever reach the final table in the Main Event.

Play will commence on Friday with 2,500/5,000 blinds and a 500 ante. After 54 eliminations, the remaining players will all be eventually making a trip to the cashier’s cage, with $19,227 the least amount won. That is expected to occur within roughly three hours of play. The conclusion of Day 4 should see just a few hundred players still around, all with a common goal of taking home the $8.5 million first place prize, the most coveted gold bracelet in the sport, and poker immortality.