Dubliner Dave Callaghan heads the field after Day 1 of the €2,500 buy-in main event of the World Poker Tour (WPT) Ireland at his home city’s CityWest Hotel. 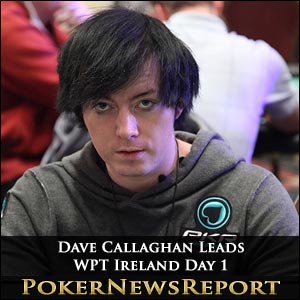 Dubliner Dave Callaghan heads the field after Day 1 of the €2,500 buy-in main event of the World Poker Tour (WPT) Ireland at his home city’s CityWest Hotel.

A total of 338 players started Day 1 of the WPT Ireland, with 195 making in into today’s second day after nine levels of play, even though the PokerStars Caribbean Adventure (PCA) kicked off on The Bahamas on the same day.

Some of the biggest names in British poker were certainly attracted by the charms of Dublin, including players such as November Niner Sam Holden, John Eames, Matt Perrins and Triple Crown winner Jake Cody, from Rochdale.

But it was PKR Poker sponsored expert Pot-Limit Omaha Poker player Callaghan who ended Day 1 in charge as all the entrants aim to secure the €202,680 top prize, as well as a seat at the $25,000 buy-in WPT Bellagio, after he gradually chipped up during the opening day of the main event.

Callaghan, who rarely plays No-Limit Hold’em Poker, secured his largest pot after seeing off an opponent who had gone all-in for 22,000 chips on a flop of K-K-9 with the pot only sitting at 3,000.

The Irishman – after grinding for most of the day – made the call while holding jacks to be confronted by a pair of eights. The turn and river cards failed to improve his opponent and Callaghan took down a pot of about 45,000.

Black, meanwhile, made his move up the rankings about halfway through Day 1 with the blinds at 100 and 200 with a 25 ante.

The experienced and entertaining Dublin star made it 600 chips to go pre-flop, only for Sweden’s Sofia Lövgren to then three-bet to make it 1,300.

Lövgren took her time, but made the call as the 3♦ arrived on the turn. Black popped 4,600 chips into the ever-growing pot and the Swedish star called to see the 4♥ come on the river.

Now in full-on aggressive mode, Black bet 15,000 and Lövgren called, only to see Black reveal 7♣ 7♦ for a full house.

Ross Boatman In with a Shout

Englishman Trickett will be more disappointed than most of those hitting the rail, though, after such an incredible 2011 which included picking up $1,364,666 for winning the €8,500 buy-in No-Limit Hold’em main event at the Partouche Poker Tour (PPT) in Cannes back in September

Trickett then shoved all-in not long after with A-10, only to be faced by A-Q.

As with the previous losing hand, Trickett was unable to improve sufficiently and was quickly heading for the exit door.