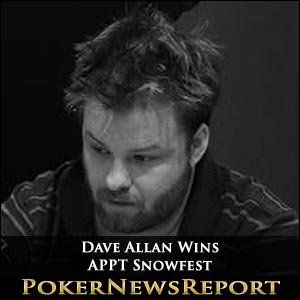 The conclusion of the PokerStars-sponsored APPT Snowfest Main Event practically mirrored last year´s victory by Marcel Schreiner – player takes big lead, player loses big lead, player fights back to victory – only this year the winner did it while suffering the symptoms of a nasty flu bug which was going around the SkyCity Casino in Queenstown and (unlike Schreiner last year) actually looked pleased when he won.

Dave Allan – who plays online as “dave798111” – had taken a considerable chip advantage on Day 1A over David Wonson and Michael Kanaan, extended it on the dual-shift Day2 ahead of David Zhao and Ricky Kroesen, and seemed to be steaming towards the final table on Day 3 when forcing Ivan Zalac out of a quarter million chip pot.

Allan Loses the Chip Lead at End of Day 3

However, once the bubble burst on Saturday evening, players were to take their chances against the chip leader – most notably Matt Wakeman, who doubled up with 3♣ 3♦ against the big man´s J♦ J♣ on a board which ran A♠ K♦ 10♦ / 10♣ / 3♠ and, by the time the players had assembled for the final table on Sunday, Dave Allan was down to fourth position behind Day 1B chip leader Ken Demlakian, Thai player Jordan Westmorland and David Zhao.

David Zhao – who had only made an impact on this event in the closing stages of Day 2 – was involved in an incredible hand earlier in the day, coming from behind (pre-flop) with A♥ K♣ -v- the J♥ J♠ of Billy Argyros, to take the lead on a flop of 6♥ 6♦ A♦, to lose it again on the turn of J♦ – only to eliminate Argyros from the tournament when the A♣ was dealt on the river.

And if You Thought That was a Bad Beat!

If the manner of Billy Argyros´ departure was a shock – especially for Argyros – spare a thought for the player eliminated in tenth position – Chiu Yeung Lee. Lee got his final 130,000 chips into the middle with Q♠ Q♦ against Jordan Westmorland (J♣ J♥) and thought he had won the hand when the Q♣ gave him a set on the river. However, the preceding cards – 2♥ 9♥ 10♥ / 8♣ – gave Westmorland a straight, Lee was eliminated and the final table was set.

Final Table Sees Action from the Off

Sunday´s final table started off with a hail of action. In the very first hand, Dave Allen regained the tournament lead when his J♥ J♠ was too strong for the K♥ 10♦ of Ken Demlakian, but within several hands Demlakian had fought back when his A♠ K♣ hit an Ace on the river to best David Evans´ Q♣ Q♥ and eliminate Evans from the tournament in ninth position.

It did not take long before the other short-stacked player – Ivan Zalac – departed, when he ran his pocket Fives into the Nines of Ricky Kroesen, and PokerStars Pro Bryan Huang was soon on his way back to Singapore when his 7♦ 7♥ were no match for the K♣ K♥ of Jordan Westmoreland.

Ricky Kroesen continued his good run when doubling up with A♠ K♥ through Dave Allan (Q♦ Q♠) and then forcing David Zhao out of a 150,000 chip pot and, when Matt Wakeman was busted in sixth (losing with A♦ 5♥ against the 6♣ 6♦ of Jordan Westmorland), Dave Allan was now the shortest-stacked on the five remaining players.

Fortunately, Dave Allan was able to double up in the very next hand, as his shove with J♠ J♦ was called by Westmorland (K♦ 10♠), but the next level was all about Ken Demlakian – forcing a fold out of Jordan Westmoreland in a half million chip pot and then turning a straight against David Zhao to be the first player passed the million chip barrier and to control nearly half the chips in play.

The enormity of Dave Allan´s achievement in winning the APPT Snowfest Main Event is best illustrated by showing the chip counts as the tournament went three-handed.

With blinds at 10,000/20,000 (ante 2,000), Dave Allan looked in serious trouble but fortunately Demlakian and Westmorland were trying to avoid each other as much as possible – a strategy which played into Dave Allan´s hands perfectly.

First, some weak betting enabled Allan to limp into a three-way pot and add 50% to his chip stack with a flopped pair of Sevens, and then he was allowed into the next flop cheaply with K♥ 5♠ to see K♣ 10♣ 10♦. The K♦ on the turn gave Allan a full house and he extracted maximum value out of Jordan Westmorland by betting 130,000 on the 2♦ river and getting called.

Allan also took a chunk out of Ken Demlakian when another flopped pair of Sevens was good enough to capture a 200,000 pot and within the space of 30 minutes Dave Allan had gone from last to first. However it was Ken Demlakian who was to have the advantage going into the heads-up – and again a pair of Sevens was responsible for a major change in the dynamics of the game.

With a flop showing 3♠ 5♠ 5♦, Jordan Westmorland check-raised Demlakian up to 175,000 chips. The 7♥ on the turn prompted Westmorland to shove his remaining 388,000 chips into the middle of the table and again Demlakian called.

Both players had plenty of outs, but Demlakian was in the lead with his pair of Sevens, and it stayed that way as the Q♣ on the river improved neither hand and Westmorland was out – giving Demlakian a 1.70 million -v- 1.06 million chip advantage going into the Heads-Up.

Dave Allan was quick to make inroads into Ken Demlakian´s chip stack with aggressive post-flop play and, at one point, even grabbed the lead in the early exchanges. However a Ten-high straight captured a massive pot for Demlakian and reduced Allan to 600,000 chips. A flopped pair of Sevens (again!) gave Allan a double-up and he again briefly took the chip lead before Demlakian rivered a pair of Queens to enter Level 25 with a narrow advantage. However, with blinds now at 20,000/40,000 (ante 4,000), it was all going to be over in three quick hands.