Andrea Dato won a dramatic victory in the Gioco Digitale WPT Venice Carnival – beating Sam Trickett in the heads-up after a day of exceptional mixed fortunes. 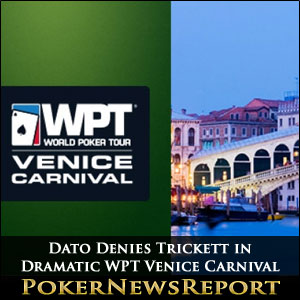 Andrea Dato won a dramatic victory in the Gioco Digitale WPT Venice Carnival – beating Sam Trickett in the heads-up after a day of exceptional mixed fortunes.

There was a sensational conclusion to the Gioco Digitale WPT Venice Carnival Main Event at the historic Casino Di Venezia at the weekend, when Andrea Dato overturned an almost 3:1 chip deficit in the heads-up against Sam Trickett to claim victory and the €105,000 first prize.

However, on the lead-up to the heads-up confrontation, there had been some astonishing hands of poker played between a very strong final table line-up which included not only Sam Trickett, but also winner of last month´s EPT Deauville Main Event Sotirios Koutoupas, and former Season IX WPT Venice winner Alessio Isaia.

Koutoupas Starts with a Suck Out – Then Blows his Stack

With blinds starting at 10,000/20,000 (ante 3,000), the two short-stacked players had to make moves fairly quickly. Sotirios Koutoupas twice shoved from position before getting a caller on the third time of asking, and he looked terrible shape with Q♦ J♦ against Alessio Isaia´s J♥ J♠. The flop of 10♣ 7♦ 5♦ gave him outs to Flush, but it was the A♥ on the Turn and K♣ on the River which completed Koutoupas´ Ace-high straight and enabled him to double up.

However, Koutoupas´ tournament life was short-lived. The Greek moved all-in with 10♠ 9♥ on the board J♥ 7♦ 5♥ / Q♦ and was called by Andrea Dato who had Q♥ 3♥ for top pair and a Flush draw. The 6♠ on the River missed both players, and Sotirios Koutoupas was out of the WPT Venice Carnival in sixth place, while Andrea Dato had increased to chip stack to 2.1 million chips.

An incredible sequence of hands followed which resulted in the demise of Alessio Isaia and Mario Vojvoda. In the first of these hands, Maurizio Saieva (6♦ 6♣) made a Full House on the River when Alessio Isaia (J♠ 8♠) missed his Flush draw, and then the last of Isaia´s chips went in with 8♠ 6♠, only for Sam Trickett (Q♦ 9♣) to flop a Full House and eliminate the former WPT Champion in fifth place.

Mario Vojvoda´s dismissal was far more sensation – and it involved two Full Houses. Vojvoda had raised with J♥ J♠ in the pre-flop betting and got a call from Sam Trickett (Q♦ 8♦), Following the flop of Q♠ Q♥ 9♥, Vojvoda (two pairs) bet 70,000, Trickett (trip Queens) raised to 140,000 and Vojvoda three-bet to 280,000. Sam Trickett made the call and, following the J♦ on the Turn, Vojvoda check-shoved with his Full House. Trickett reluctantly made the call, but the 8♥ spiked on the River to give Sam Trickett a better Full House and Mario Vojvoda was eliminated from the WPT Venice Carnival in the most sensational of circumstances.

Maurizio Saieva is a Hard Man to Get Rid Of

Going into three-handed play, Sam Trickett had a slight chip advantage, but Andrea Dato twice forced him out of substantial pots to take a narrow lead. Remarkably Maurizio Saieva had managed to nurse his chip stack through the early action, but his hopes of winning the event took a substantial blow when Sam Trickett (Q♠ 2♠) turned a Spade Flush to reduce to Saieva to his starting stack for the day.

Saieva had a good chance to double-up against Andrea Dato A♦ 3♥ > K♥ 7♦ until the board delivered a Full House and the pot was spilt, and then Sam Trickett took down a massive pot against Andrea Dato (Q♠ 5♠ > 9♦ 7♦) when both players hit two pairs. Sam Trickett eventually dispatched Maurizio Saieva to the rail in third, but even then there was an element of good fortune about the hand; as Trickett (6♦ 4♥) had called Saieva´s (A♥ J♦) shove with a hand that would have normally been outside his calling range, but then paired his 6♦ on the flop to eliminate the robust Italian.

Heads-Up Goes One Way, and Then The Other

Andrea Dato doubled-back almost immediately when his K♣ Q♥ connected with the flop to best Trickett´s A♣ 8♦, and now it was Dato´s turn to apply the pressure – reducing Sam Trickett to 1.2 million chips with a series of post-flop bets. Incredibly Sam Trickett doubled back again – hitting a runner-runner King-high Straight to move back into the chip lead, and then – almost as incredibly – both players got all their chips into the middle on a flop of 8♠ 4♥ 3♣ – Trickett with 8♥ 5♠, Dado with J♦ 8♣. Dado´s dominant kicker won the hand, and Sam Trickett was reduced to his last three big blinds.

Those last three blinds went in on the next hand with K♣ 7♣, and Trickett looked good to double up against Andrea Dato´s 10♠ 2♥, until the 2♣ landed on the Five-high flop and neither a King nor a Seven fell on the Turn (9♠) or River (5♣). After a sensational and dramatic climax to the WPT Venice Carnival, Andrea Dato had become the latest WPT Champion – a title which still eludes Sam Trickett despite everything else than the Englishman has won.