The dates for the 4 poker festivals being run as part of the PokerStars Macau series were just released, but have already been changed on one of the events. 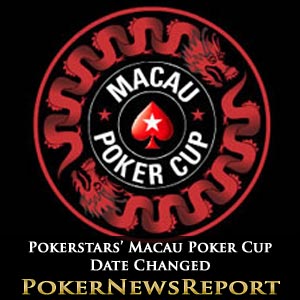 The dates for the four poker festivals being run as part of the PokerStars Macau series were only released a few days ago, but organisers have already made changes to one of the events to be staged at the Grand Waldo Entertainment Complex.

The second 10-day event, a Macau Poker Cup (MPC) tournament, was originally down to take place between July 28 and August 6, but has now been moved further back to begin on August 11 through to the 20th.

It is advised that you note down these new dates – particularly if you are considering taking part – while we at Poker News Report will keep you updated on any future changes or modifications.

The other three dates remain unchanged, with the opening Red Dragon event kicking off on Saturday, June 9. The undoubted highlight of this tournament will be the HDK$11,000 buy-in No-Limit Hold’em Red Dragon main event that guarantees at least HKD$3 million in prizes.

The Grand Waldo will also host the Macau Poker Cup Championship 2012 (from September 7 to 16) and the 17-day Asia Championship of Poker (ACOP) from October 26 to November 11.

For additional details on the upcoming PokerStars Macau events, check out www.pokerstarsmacau.com/tournaments/macau-cup/