Darren Murphy out-gunned some of the UK´s top poker players yesterday to take a commanding lead in the UKIPT Series 6 Event after the first of two Day 1s. 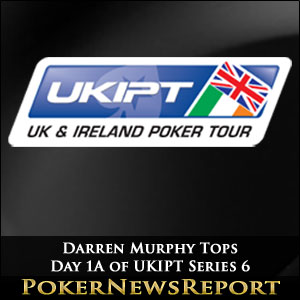 Darren Murphy out-gunned some of the UK´s top poker players yesterday to take a commanding lead in the UKIPT Series 6 Event after the first of two Day 1s.

The third of this year´s UKIPT “Series” events got underway yesterday at the PokerStars Live card room in London´s Hippodrome Casino, and an excellent turnout of 163 players ponied up the £275.00 buy-in to compete in the first of two opening flights.

After twelve brutal 30-minute levels of action, just 48 players will carry through chips to Sunday´s climax – led by Danny Murphy, who survived nine potential outs to bust Scott Barrett A♠ K♣ > A♥ 7♣ and then sealed his position at the top of the leaderboard when out kicking Leighton Thomas A♥ K♥ > A♠ 10♣ towards the close of play.

Stars of the poker world were well represented at the UKIPT Series 6 Event. Jake Cody and Jerome Bradpiece were among several notable players who failed to survive the day, while Full Tilt Ambassador Sin Melin recovered from a poor start to bag up 69,300 chips at the end of the day – partly courtesy of a rivered set of Tens against an opponent who had flopped a pair of Kings.

One famous name in the poker world who is usually reporting on live PokerStars events – Marc Convey – suffered a terrible bad beat after have got all his chips into the middle with pocket Nines on a flop of K♥ 9♥ 2♠. Convey was called by Adam Kossew – who had flopped a set of Deuces – and who then spiked his one-outer Deuce on the River to make Quads and bust Convey from the event – at least with a good story to report on!

Unfortunately for Marc Convey, he had also been involved in a last-longest bet with Jake Cody and Sin Melin- the loser of which had to wear an outfit of their opponents’ choosing during the forthcoming UKIPT Isle of Man event (October 2nd -6th). Sin Melin, have won the bet, has not yet revealed what her choice of costume will be but, knowing Melin, it is likely to be outrageous!

WSOP Bracelet winner Willie Tann was one of the more recognisable faces among the crowd of players that took part in yesterday´s opening flight of the UKIPT Series 6 event, having also recently enjoyed deep runs in the Genting Poker Series in Newcastle, the Estrellas Main Event in Barcelona, and two GukPT events in Reading and Leeds.

Tann finished second in chips overnight, but could have been a massive chip leader after folding 7♦ 9♦ on the flop of A♠ 10♦ 8♦ and then seeing a Jack appear on the Turn which would have won him a massive four-handed pot. Tann also claims that he folded the best hand in another valuable pot, but he managed to finish with 170,400 chips and, with blinds of 1,200/2,400 (ante 300) when Day 2 gets underway on Sunday, that´s not a bad position to be in.

Day 1B Promises to be Another Busy Day

Organisers of the UKIPT Series 6 event are anticipating another fast and furious day at PokerStars Live today, with a field in excess of 200 anticipated to join in the action. PokerStars is also hosting live satellites to the forthcoming UKIPT London Main Event (October 8th – 12th) and the EPT London Main Event (October 12th -18th), so there could be plenty of queuing going on around Leicester Square (not for the first time!).

You can find out if Darren Murphy retains his chip advantage, if Willie Tann folds any more winning hands, or if Sin Melin decides on what Marc Convey will be wearing at the UKIPT Isle of Mann by following @PokerNewsReport on Twitter