Kane Kalas did all the hard work on the final table of the WPT Borgata Championship, but it was Darren Elias who prevailed in the heads-up to win the event. 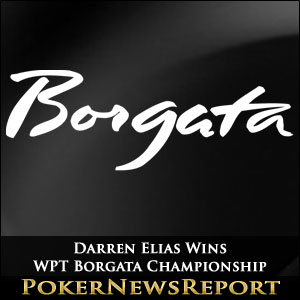 Kane Kalas did all the hard work on the final table of the WPT Borgata Championship, but it was Darren Elias who prevailed in the heads-up to win the event.

The WPT Borgata Championship was the fourth largest event ever staged by the World Poker Tour. The $3,500 buy-in event attracted 1,226 entries, which created a prize pool of $3,924,426 which was shared out between the top 120 players.

After a protracted penultimate day of the Championship, Kane Kalas held a substantial chip advantage when the final six players took their seats at the Borgata Casino on Saturday. However, he faced a tough challenge from vastly more experienced opponents if he was to go on and win the WPT Borgata Championship – including Darren Elias, who came fifth in this event in 2011.

The final table of the WPT Borgata Championship had an explosive start. In hand #3, Kane Kalas and Darren Elias chopped a big pot when both players rivered King-high straights, in hand #4 Kalas bust Ray Qartomy from the final table with A♣ A♠ > A♦ J♠ and, before the button had completed a full circuit of the table, Kalas found pocket Aces once again to eliminate Blake Bohn in fifth place A♣ A♦ > Q♥ Q♠.

Kalas Loses lead, but Takes it Back Again

Kalas was to suffer a further blow to his chip stack when doubling up Aaron Overton Q♠ 8♥ > A♦ J♣, but – after Darren Elias had doubled-up Jose Serratos A♣ 10♣ > A♦ 9♦ – Kalas forced Elias out of a 2 million chip pot to take over at the top of the leaderboard once again.

There was no slowdown to the pace of the final table, and the heads-up was reached in forty-five hands – Kane Kalas completing a hat-trick of KOs when busting Aaron Overton in fourth place J♣ J♠ > A♣ 2♥, and making it four-out-of-four when sending Jose Serratos to the rail in third place 7♦ 7♠ > K♥ 9♥.

Kane Kalas took a 24,800,000 -v- 12,025,000 chip advantage into the heads-up against Darren Elias, but Elias used his experience to chip away at Kalas´ advantage and after thirty hands of heads-up play, the chip counts were level after Elias had forced Kalas out of consecutive big pots.

Darren Elias again checked the Turn of K♦, and responded to Kane Kalas´ bet of 3,225,000 chips by announcing he was all-in. Kalas snap-called and the cards were on their backs:

Kane Kalas: A♠ K♥ for one pair

Kalas needed an Ace, a Ten or a Seven on the River to stay alive in the tournament, but the dealer dealt the 3♠, and Darren Elias had won the WPT Borgata Championship for $843,744.