Darcourt, who won the WPT Main Event in Bucharest last year and lead the early stages of the EPT Barcelona last week, improved his starting stack of 30,000 to 198,500 by the close of play, and will be in third place overall when Day 2 starts tonight. 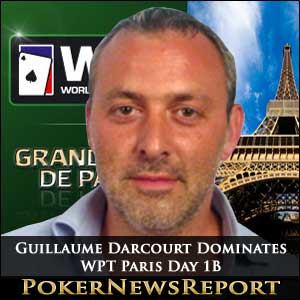 It is always difficult to ignore the presence of French poker player Guillaume Darcourt. Usually it is because of his trademark pink-dyed hair, but yesterday it was due to the impressive chip stack he developed in the second Day 1 of the World Poker Tour Main Event at the Aviation Club de Paris.

Guillaume Darcourt, who won the WPT Main Event in Bucharest last year and lead the early stages of the EPT Barcelona last week, improved his starting stack of 30,000 to 198,500 by the close of play, and will be in third place overall when Day 2 starts tonight.

A Record Entry for a European WPT Event

172 players qualified or shelled out the €7,500 to get involved in Day 1B, creating a new record for a “European” World Poker Tour Main Event of 312 entries and a prize pool of €2.34 million. The winner will walk away on Friday with a cool €½ million for a week´s work, plus a chance to trump that with a $25,000 seat to the WPT World Championship in Mashantucket at the end of October. Everybody who makes the final table will receive at least €55,555, and the bubble goes all the way down to 36 players – all of whom are guaranteed €11,110.

97 of the 172 players registering yesterday will return to their seats this afternoon, and join the 70 players who survived Day 1A. As well as Guillaume Darcourt (198,500 chips), we will be looking forward to seeing 2011 WSOP bracelet winner Joe Ebanks (142,600), WPT 5* Classic Winner Shawn Cunix (115,100) and British Poker Awards International Player of the Year, Jason Mercier (60,175). Best positioned among the UK poker players who swam across the Channel to compete in Paris is Max Silver (124,100), but there are also some very talented compatriots further down the list, including Sam Holden, Praz Bansi and David Vamplew.

A Day in the Life of David Vamplew

The last-named of the British stars ran the full gauntlet of emotions on a typical first day of a tournament – first up, then down, then up again. In one of the first hands of the day, David took an early chip lead when his A♠ Q♥ met with a board of Q♦ A♦ 4♦ / A♣ / J♠ to give him a full house against Mike Lamprecht´s (K♦ 10♦) nut flush. Sadly, he was not to connect with another hand for hours and saw his stack starting to dwindle away as all around him were trading chips like hot potatoes. Eventually, in the penultimate level of the day, David got all-in with K♠ Q♣ against Ville Haavista´s J♥ 3♥ on a flop of 2♥ 10♥ 9♣. The heart Haavista needed to scoop the pot failed to materialise, and David doubled up with King high. A few hands later and David was using his revitalised chip stack to boss a 5,000 chip pot out of Tyler Bonkowski and, by the close, David was just above his starting stack with 34,000 chips.

This is how the players from the two Day 1s will measure up against each other when play starts this afternoon at the Aviation Club de Paris. The plan is to play down to 54 today, but with all things French, the plan is a little “flexibles”.