Dara O´Kearney Leads UKIPT Isle of Man after Day 1A

The Isle of Man UKIPT Main Event got underway yesterday and, after eight levels of play on Day 1A, top Irish poker player Dara O´Kearney heads the field. 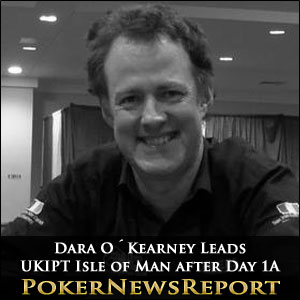 The Isle of Man UKIPT Main Event got underway yesterday and, after eight levels of play on Day 1A, top Irish poker player Dara O´Kearney heads the field.

There was a unique feel to Day 1A of the UKIPT Isle of Man Main Event yesterday as employees of PokerStars and Full Tilt Poker (whose headquarters are situated on the island) were allowed to compete in a PokerStars-sponsored Main Event for the first time.

The likes of VIP Program Senior Manager Caleb Sheridan and VIP Events Manager Dylan Coady rubbed shoulders with players such as Team Online Pro Mickey Petersen, recent UKIPT London winner Robbie Bull and third place finisher in the recent WSOPE Main Event, Dominik Nitsche among the 113 players who either ponied up the £1,100 buy-in or qualified online to play in the first starting flight of the £500,000 guaranteed event.

O´Kearney Comes Out on Top

After eight sixty-minute levels, it was last season´s “Online Qualifier of the Year” Dara O´Kearney who was at the top of the leaderboard after wandering lonely as a card dead cloud through the first three levels and then losing a stack of his chips to Owen Shiels in Level Four A♥ K♥ > Q♠ Q♦.

O´Kearney recovered by doubling up against Ludovic Geilich 4-4 > K-7 after a flop of 7-7-4 and then flopping a set of Sixes against Tim Davie. He then got his revenge on Owen Shiels with a Turned King and two streets of value, before winning three consecutive pots against Niall Farrell to finish the night with 112,000 chips.

Among the fifty-four players remaining in the UKIPT Isle of Man Main Event there is a good mix of recreational players, PokerStars staff and seasoned professionals. Other than Dara O´Kearney, three other players bagged up more than 100,000 chips at the end of the night – two online qualifiers (Jamie O´Connor and Alexander Schilt) and a Rational Group employee (Chris Straghalis).

When Day 1B of the UKIPT Isle of Man Main Event gets underway at the Villa Marina Complex this afternoon, PokerStars might be looking at the entry list with a little trepidation. Whereas usually a UKIPT Main Event smashes through its guarantee with no problem, this is the first time an event has been played at a venue where there is not an established poker community.

Although the PokerStars pros are expected to turn out in force today, and a big party are flying in from Dusk till Dawn (where the climax of the UKIPT series will be hosted at the end of November and where there is an established poker community), PokerStars need to find 387 players to reach their guarantee – more than three times the number of players who turned up on Day 1B.