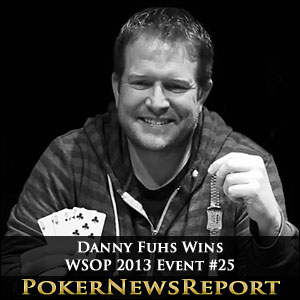 They say there is no worse feeling in poker than making a WSOP final table, only to bust out short of winning a bracelet. Californian poker pro Danny Fuhs can certainly attest to that. One of the most consistent players in poker, Fuhs has cashed in dozens of WSOP and WPT events, but has yet to win a single piece of hardware – at least not until now.

Late last night, Fuhs won his first bracelet in Event #25 – $5,000 Omaha Hi-Low 8-or-better. The highest buy-in O8 tournament of this year’s World Series, the event featured 241 entrants, many of whom rank among the best players in the world. Players such as Huck Seed, Dario Alioto, Mike “The Mouth” Matusow, Shawn Buchanan, Mario Ho and former WSOP Main Event Champion Jonathan Duhamel would make their way into the top 27. No donkeys here.

Duhamel would eventually become the final table bubble boy, busting in 10th. The final table was comprised of several highly recognizable players – 2009 WSOP Player of the Year Jeff Lisandro and Michael Mizrachi’s older brother Robert among them. The action started out fast-paced and aggressive, as several players hit the rail before they could even get comfortable. But with the short stacks out of the way, the action slowed. The remaining four participants would play for several hours before recognized Omaha professional Brian Hastings would be victimized by a dirty river card that allowed Mizrachi to scoop a monster pot. However, Mizrachi would have a hard time holding onto Hasting’s chips, and was eliminated in third.

As heads-up play began, Christopher George and Fuhs were neck-in-neck in chips. Poised for a long battle, neither player gained a definitive advantage in the match until several hours in. Fuhs would then receive all kinds of action after turning quad sevens. George would never reveal his hand, but it is assumed he either had some sort of full-house or thought Fuhs had air. From there, Fuhs began to apply the pressure, and the momentum swayed decidedly in his favor.

On the final hand of the tournament, George raised with A-9-5-4 (3 clubs) and Fuhs three-bet 7-6-3-2 (2 hearts). Fuhs paired his deuce on the flop, and that’s all he would need to scoop the pot. Fuhs was declared the winner, breaking his streak of multiple final table appearances with out a victory. Maybe “deuces never loses” after all.

On a side, Dan Kelly banked his seventh cash of this year’s series. The fresh faced bracelet owner is on a righteous tear, and is on pace to break the all-time record for most cashes in one WSOP. The current record is 11 and is held by Konstantin Puchov; a record he only set last year.