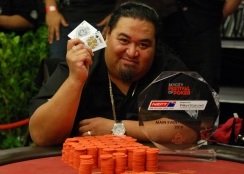 With so much attention on the World Series of Poker Europe in London and the WCOOP series online at PokerStars players could be forgiven for forgetting about the Asia Pacific Poker Tour’s stop in Auckland (New Zealand) this week. This was the third time the event was held here with the APPT being sponsored by PokerStars where players have been qualifying for several months. The tournament was held at the Skycity Casino and had a buy-in of NZ$3,250 which is approximately $2,400.

The event began with two starting days (Day 1A and Day 1B). Day 1A attracted 89 players to the event whereas Day 1B attracted 129 to bring the total number of entrants to 218 and creating a prize pool of NZ$654,00 with the top 24 players cashing and the winner receivingthe title and a payday of NZ$170,000. Despite 218 entrants not being a vary large field, what was interesting was the fact that the players competing were from 28 different countries. Among those to bust on Day 1B was reigning champion Simon Watt who won the title last year with pocket 5s.

When the action got down to the final table it didn’t take long for fireworks as shortest stack Leo Boxell found himself all-in against Danny Silk. Silk held AK but found himself dominated against Boxell’s AceAce however a flop of K65 gave Silk hope and Boxell’s stomach must have turned when the turn card K was revealed giving Silk the lead and his Pocket Aces crushed with only one card remaining he needed the final Ace however it was 3 on the river and Boxell was eliminated in 9th place for NZ$11,835.

After a constant battle for chip leader between Danny Leaoasavaii and Tom Grigg, it was Grigg who would go into heads-up play as chip leader after eliminating Mitrovic in third place. Mitrovic pushed all-in with 98 and Grigg made the call with A8 with the dealer revealing a board of 4103Q2 doing nothing for either player Mitrovic was out for a NZ$60,500 payday and it was down to heads-up play.

Heads-up play actually took quite a while between this pair as the chip lead was exchanged several times but almost four hours into heads-up play Leaoasavaii found himself in control with a 2:1 chip lead and when Grigg pushed for a double-up with J10 he ran into Leaoasavaii’s AK and again the board was uneventful for both players 3496Q giving Leaoasavaii, the ‘Godfather of New Zealand Hip-Hop’, the victory.