Jannick Wrang has completed an unlikely hat-trick of Danish successes on the European Poker Tour (EPT) – with his victory in the PokerStars Campione main event. 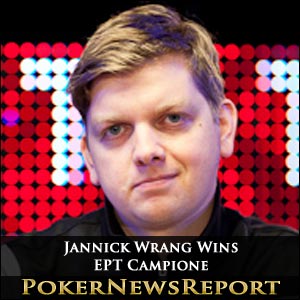 Jannick Wrang has completed an unlikely hat-trick of Danish successes on the European Poker Tour (EPT) – with his victory in the PokerStars sponsored Campione main event following on from wins for Mickey Petersen in Copenhagen in February and Frederick Jensen in Madrid three weeks back.

The 31-year-old from Copenhagen outlasted 569 other players at the first tour stop in Campione to collect the €640,000 – or $839,437 – top prize for a “nice pay day” from the €5,000+€300 buy-in No-Limit Hold’em event at the Casinó Campione d’Italia, ultimately defeating American heads-up expert Olivier Busquet in the one-on-one clash.

The New Yorker left with €430,000 for his runner-up spot, while experienced Pot-Limit Omaha tournament player Wrang also picked up and EPT trophy and a Shamballa bracelet valued at more than €10,000.

Certainly, Wrang was happy and relieved to have seen off the challenge of 30-year-old Busquet – the 2009 World Poker Tour (WPT) Borgata Poker Open champion – once the eight-handed final table had been cut back to just two survivors.

The Dane – whose cash overshadowed Petersen’s $444,595 for winning in Denmark and Jensen’s $649,368 for victory in Spain – said he had been “really rooting for Olivier to bust out when he was all-in (with play four-handed) because he’s a very tough player”.

However, the latest EPT season eight champion was quick to stress that “everyone was tough actually – it was a sick final table”, before adding that he is so excited by his latest victory that he “can’t compare it with any other wins”.

Incredibly, Wrang’s victory more than tripled his live tournament earnings as he had sat at $387,615 before this EPT main event, while his biggest previous cash had been for just $64,226 after his runner-up finish in the $1,070 buy-in No-Limit Hold’em tournament at the Deep Stack Extravaganza III in Vegas last July.

Italian Stefano Puccilli was eliminated in seventh for €71,500, while Swede Robin Ylitalo finished in eighth for €54,000, USA-based Bulgarian Simeon Naydenov took ninth for €41,000 and Scotsman David Vamplew hit the rail in 10th – also for €41,000.

Wrang – who has earned almost $1 million [geolink href=”https://www.pokernewsreport.com/pokerstars”]playing poker at PokerStars[/geolink] – emerged victorious from a final table that lasted 13 hours when he beat out the challenge of Busquet in a 75-minute heads-up encounter.

However, just one more hand was needed to crown a champion when Busquet opened for 320,000, only for Wrang to move all-in. The American called all-in and the players went to a showdown.

Busquet showed A♦ 9♥ and Wrang revealed A♥ 6♦. The flop came down A♠ 3♥ 5♥ and it appeared likely that Busquet was about to double-up to take the chip count almost level, before but the 10♥ turn and 2♥ river gave Wrang a flush for victory.

With Bulgarian Naydenov – who is based in Massachusetts – hitting the rail on a shortened Day 4 as the final table bubble boy, it took about 90 minutes before Gothenburg’s Ylitalo became the first elimination of Day 5.

The Frenchman quickly folded, but Budapest’s Botond had aces and immediately called. No kings came on the flop, turn or river, leaving 25-year-old Ylitalo in eighth place.

That elimination was quickly followed by the exit of the last Italian, Rome’s Puccilli, in seventh place when he three-bet jammed Busquet’s initial raise. The 40-year-old showed J♣ 10♣, but was unable to beat out the American’s A♥ 2♥.

Three hours later, sixth place went to Gelsenkirchen’s Nagel – who picked up $81,536 for winning a $265 buy-in PokerStars Spring Championship of Online Poker (SCOOP) event last year – when the 29-year-old’s A♥ Q♠ was unable to overcome the Q♣ Q♥ of Wrang.

The Wilsele native moved all-in while holding A♦ 9♦, only for caller Soulier – who showed K♦ Q♦ – to land a king on the turn to give him top pair and the elimination.

Another three-and-a-half hours passed before Botond was picking up his cash for taking fourth place.

Botond just called as the pot grew to nearly 2.4 million to leave the Hungarian with approximately 2.3 million.

The 8c turn saw Wrang bet 1.1 million, leaving Botond to consider his options before shoving all-in. The Dane called to show K♥ 4♥ for top pair and a flush draw, while Botond needed a three or an ace with his A♥ 3♣ hole cards to take the pot. However, the 4♠ arrived on the river to eliminate the Hungarian.

Now three-handed, another hour came and went before 42-year-old Soulier’s hopes of victory at his first EPT final table were ended. With the Avignon native’s chip stack having been severely reduced, the Frenchman decided to move all-in with K♣ Q♠ and was called by Wrang, who showed A♥ 6♣.

The flop came K♠ 6♥ 2♦ to give Team Everest Poker Pro Soulier top pair and Wrang middle pair. However, the Dane took the lead on the turn when the A♠ arrived and stayed in front following the 7♦ river to notch yet another elimination.

Soulier’s exit left just Wrang and Busquet to battle it out as the Dane made it a treble for his nation – surpassing the double German victory from earlier in season eight when Martin Schleich took the second tour stop in Barcelona and Benny Spindler lifted the following main event in London.

Liv Boeree and Bertrand ‘ElkY’ Grospellier were the only Team PokerStars Pros to cash, with the Englishwoman taking 51st and the French Triple Crown winner securing 61st – both for €9,000 ($11,805).

Day 4 had seen the likes of Fifer Vamplew (10th) and Swiss star Ronny Kaiser (22nd for €15,000/$19,674) – both former EPT champions – hit the rail earlier than they would have hoped, while Day 3 witnessed the demise of Welshman Roberto Romanello, Lebanon’s Nicolas Chouity and German Martin Finger.

Thereafter, the final leg will arrive in Monaco on April 23 for the €10,000+€600 main event of the tour’s Grand Final at the Monte Carlo Bay Hotel & Resort. The main event actually kicks off on April 25 for the first of two Day 1 streams and ends on the 30th, while the final day of the stop, May 1, will see several tournaments as well as the invitation-only PokerStars EPT Player of the Year Awards ceremony and wrap party take place.