Daniel Smith is King of Unibet Open in Cannes 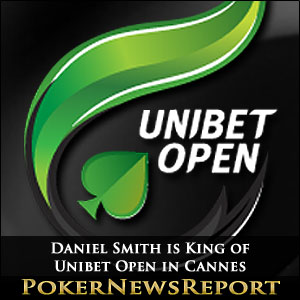 There was another massive turnout for a Unibet Open Main Event when 457 players travelled to Cannes in the South of France this past weekend and ponied up the €1,100 buy-in to play in the Main Event at the Casino Barriere Le Croisette.

After two opening flights, the 54-player bubble burst deep into Day 2 – when Arkadiusz Olszowy ran his A♠ 10♦ into Mark Taylor´s A♥ K♣ – after which a rash of eliminations left just seventeen players to contest the €88,000 first prize.

The final table was set after two hours of fast-paced action; with Michael Nielsen having a substantial chip advantage over French poker superstar Alain Roy and a closely matched group of players in behind:

Zarbo and Johansson First to Depart

When the final table of the Unibet Open Cannes got underway, the players were just a few hands into Level 23 (blinds 20,000/40,000 – ante 4,000). The early action saw a few chips passed around without any major incidents, and the first casualty was Giuseppe Zarbo – who had the misfortune to shove pre-flop with A♣ K♠ and get called by Nicolas Le Floch (A♠ A♦). Le Floch only just had Zarbo covered, and the Italian was eliminated in ninth place.

Le Floch was not so fortunate the next time he called a shove – this time his J♠ J♦ coming second to Daniel Smith´s A♥ K♠ (Smith rivered trip Kings after pairing his King on the flop), but it was Daniel Johansson who was next to leave the Unibet Open Cannes final table after moving all-in with A♣ Q♣ and failing to connect with the board against Michael Nielsen´s 6♠ 6♣.

Jadav and Le Floch Next to Bust

The next two departures happened either side of the blinds increasing to 30,000/60,000 (ante 5,000). Vinod Javad believed he had found a good spot to move all-in with A♥ 10♥, and was ahead of Michael Nielsen´s K♦ Q♣, before a King appeared on the flop to send Javad to the rail in seventh place.

Nicolas Le Floch´s elimination was also a little unfortunate – moving all-in with J♣ 9♣ on the board of 8♥ 7♦ 7♥ / J♠ for top pair and a gutshot straight draw and crashing into Alain Roy´s J♥ J♦ for a Turned Full House. However, any attempt that Alain Roy was making to close in on the chip leader was derailed when Krzysztof Stuchlik rivered a straight flush to reduce Roy to 1.5 million chips.

Nielsen Takes Some Hits, but Bounces Back to Lead Heads-Up

There was an incredible sequence of double ups as the game approached Level 27 (blinds now 50,000/100,000 – ante 10,000). Davor Pavic switched places with Krzysztof Stuchlik after rivering an Ace-high flush, before Stuchlik rivered trip Sixes to double up against Michael Nielsen 6♥ 6♦ > A♠ Q♦. Pavic then rivered a Full House to double up again against Nielsen A♠ J♣ > A♦ K♦ before Alain Roy also took advantage of Nielsen´s generosity – doubling up with K♥ K♣ > A♦ 10♣ to take the chip lead.

Davor Pavic fantastic run of good fortune continued when he eliminated Krzysztof Stuchlik A♠ 2♣ > Q♣ Q♠ following the flop of 5♦ 3♦ 4♦; and Pavic temporarily took the chip lead. However, it was not to last for long – as Michael Nielsen doubled back into the lead against Alain Roy 10♥ 10♦ > Q♥ 3♥, before again finding pocket Tens to bust Davor Pavic 10♠ 10♣ > Q♠ 3♣ and then eliminating the short-stacked Alain Roy K♠ Q♦ > Q♠ 9♠ to take a 11.2 million -v- 2.48 million chip lead going into the heads-up against Daniel Smith.

Daniel Smith doubled up almost immediately the heads-up began (A♠ 9♥ > K♣ J♣) and then took control of the Unibet Open Cannes with some aggressive pre- and post-flop betting. Half an hour into the climax of the Unibet Open Cannes, Smith had developed an 8,810,000 -v- 4,850,000 chip advantage over Michael Nielsen, and the final hand was just around the corner.

As usual, Daniel Smith was the pre-flop aggressor – raising to 320,000 chips from the small blind. Michael Nielsen raised to 945,000 chips, to which Smith responded by four-betting to 2.2 million chips. Nielsen had one more look at his cards and announced he was all-in. Daniel Smith did not hesitate to snap-call and the cards were on their backs: