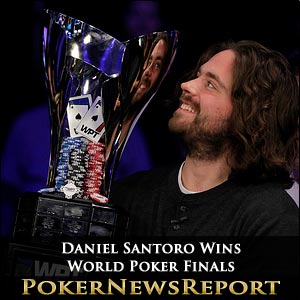 While the New Yorker picked up $449,910 as well as his first WPT bracelet after seeing off the other five final-table players, he certainly did not take the top prize the easy way – suffering numerous lows before collecting the title.

Norwegian Eli Berg – who had started the final table in sixth place on 496,000 chips – was the first to hit the rail, just three hands into the last day.

Berg, who held K♥ Q♦, flopped the top pair when the board showed K♣ 7♠ 7♦ before check-raising all-in when the turn revealed the 10♦, only to be met by Harder’s aces.

But the river did not help Berg and he was eliminated in sixth spot just a few minutes into the day for $$83,580.

Incredibly, just 10 hands later, another New Yorker, Andy Frankenberger, was out in fifth place after moving all-in following Harder’s re-raise. Frankenberger held A♣ 10♣, but was met by Harder’s pocket kings.

The flop, turn and river did not help Frankenberger and he was gone from his third WPT final table with $99,585 in his pocket.

That pot gave Harder the chip lead – and it appeared the Maryland native was all set to run over the table, only for him to witness a momentous hand another 10 hands later that altered the path of the title.

The day’s initial chip leader, Bracksey, and Santoro became embroiled in a pre-flop raising battle that saw a six-bet shove from the Massachusetts man.

Santoro moved all-in with his Q♥ Q♦, and had Brackesy, who held with A♣ 4♣, covered. The former’s hand held up and Brackesy was eliminated in fourth place for $129,816.

More importantly to the outcome of the final table, however, Santoro moved into the chip lead – and way ahead of fellow survivors Harder and American amateur Bob Carbone.

It was at this point that Carbone came to life, showing that he was prepared to mix it with the pros as he doubled through Harder to stay alive in one massive hand. However, his luck ran out soon after when moving all-in again when facing Santoro. Carbone’s pocket 10♠ ran into Santoro’s aces to give us a heads-up battle that saw the latter hold close to a 4 to 1 chip lead against Harder.

Play slowed down considerably thereafter as Santoro and Harder battled it out for the WPT title. Harder showed particular patience and determination to remain in contention as, while Santoro was a massive chip leader, he kept grinding away to double up three times to eventually emerge as chip leader himself.

Now approaching the 200th hand of the sixth day, the chip lead was swapped many times between the friends, with Santoro quickly returning to the top just four hands after Harder had stolen it from him. However, a winner was eventually crowned – on the 200th hand – and it was fittingly a coin flip.Santoro held A♣ K♠, while Harder had 10♣ 10♦. The flop showed J♣ 8♣ 5♠ to ensure that Harder remained in front. The turn of 2♥ changed nothing, too, but the K♣ river gave Santoro a pair of kings and the title, as well as $449,910.

Harder picked up $248,962 for his troubles, but will undoubtedly be disappointed not to have added a win to his fourth place finish at event #31, a $3,000 buy-in Pot Limit Omaha tournament, at this year’s World Series of Poker (WSOP).

Santoro, meanwhile, also collected a WPT Champions Cup, with his prize including a $25,500 entry for the season-ending WPT World Championship.