Perper holds a slight chip advantage over Andrew Robl as the six-handed final table of the WPT Super High Roller event kicks off today at The Bellagio. 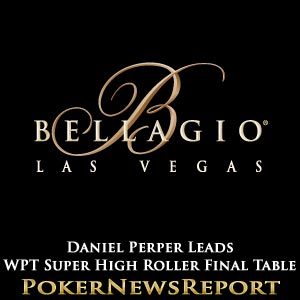 But, with just 27 players starting the event – although there were seven re-entries and one Day 2 entry – only five players will be paid, meaning one of the final half-dozen will miss out on picking up $263,160 in fifth place.

Brian Hastings Out in 10th

The 7♣ 7♦ 6♠ K♠ 3♦ board was no good to Hastings as Trickett paired his king to take down the pot and eliminate his opponent.

Robl – in middle position – raised to 100,000, only for Trickett, in the cut-off seat, to shove all-in. Robl made the call with A♣ Q♦, while Tricket turned over 10♥ 10♠ – and needed that pair to hold or improve to stay in contention for the top prize.

Still in the same level, but 10 hands later, veteran Seidel hit the rail in eighth place after losing out to Bonomo.

The action had folded around to small blind Seidel, who called big blind Bonomo. Bonomo checked his option to see a Q♠ 9♠ 7♣ flop, prompting Seidel to bet 40,000. Bonomo again made the call for the dealer to place the 3♦ on the turn.

Seidel checked but Bonomo bet 125,000, before the former check-raised to 300,000 in total. However, Bonomo, with the larger stack, then moved all-in and Seidel – after checking his hole cards – called to show 7♠ 9♣ for the middle two pair.

But Bonomo’s Q♣ 3♣ ensured he had the lead with top and bottom pair, while the 10♦ river keeps him ahead to eliminate Seidel.

Bonomo had moved up to 1,100,000 chips – or 28 big blinds – at this point, and increased that just two hands later when knocking out Vegas’ Dan Smith in seventh place.

Here are the chip counts and seat assignments for the final table: