Daniel Neilson emerged as chip leader on the penultimate day of the PokerStars sponsored EPT San Remo Main Event after an action-packed four levels of poker. 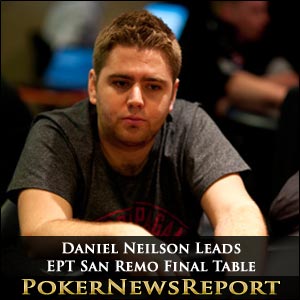 After the dust had settled on the penultimate day of the PokerStars sponsored EPT San Remo Main Event, it was Australian poker player Daniel Neilson who emerged as chip leader after an action-packed four levels of poker.

Daniel Neilson, who had started each of the last three days in second position, leads the eight remaining players with a stack double the average size and 2 million ahead of his nearest pursuer, Bulgarian Dimitar Danchev.

To understand how the day developed, one first has to learn about the demise of the chip leader coming into Day 5, Christopher McClung. Having started the day with a chip stack 50% larger than Neilson´s, a final table seat looked as good as sealed after the Canadian accounted for the dual elimination of Joni Mattila (20th) and Eli Bohbot (21st). However, the wheels came off the McClung train when he called Kevin MacPhee´s 1.7 million chip A♠ K♣ shove with A♣ Q♠, and he then lost his second major pot in as many hours when he called Jan Bendik´s 1.5 million chip shove with A♠ K♦ when holding only K♥ Q♣. The A♦ K♥ combination of Rocco Palumbo finally put McClung out of his misery a few hands later.

Neilson Flips to the Top with Quads

With the demise of McClung, the top spot at the EPT San Remo was not automatically presented to Neilson. By the time the tables had been redrawn to cater for the final 16, Neilson was down to sixth, and MacPhee, Bendik and Russian Andrey Pateychuk had all held the chip lead at one stage. Whereas over the past three days Neilson had kept in McClung´s slipstream with a big grind, today his approach was different. Getting all-in against the chipped-up Jan Bendik with J♣ J♦, it looked as Neilson was going home when the J♥ on the turn completed Bendik´s Broadway straight, but incredibly the J♠ on the river enabled Neilson to make quads and take over at the top of the leaderboard.

Closing in on the Final Table

After eliminating the short-stacked Andreas Samuelsson in thirteenth, Neilson cemented his position ahead of the remaining players when taking out PokerStars pro Johnny Lodden – whose A♦ K♣ failed to catch against Neilson´s Q♥ Q♠. Dimitry Danchev climbed up the table into second after eliminating Mustapha Kanit and rivering a Full House of Queens over Aces to cripple Kevin MacPhee, while the Eastern European contingent is completed by Jan Bendik – who made a slight recovery after doubling up Neilson – and Andrey Pateychuk, who was able to double up early against Yorane Kerignard, and then eliminated local players Alessio Isaia in 12th and Angelo Tarallo in 11th.

The remainder of the final table is comprised of UK poker player Barny Boatman, the highest ranked [geolink href=”https://www.pokernewsreport.com/pokerstars”]PokerStars qualifier[/geolink] Yorane Kerignard from France, Kevin MacPhee and the short-stacked Rocco Palumbo (what a great name for a poker player!). Palumbo´s only major contribution of the day was the elimination of Chris McClung and thereafter he watched on as six of his compatriots were sent to the rail. No doubt he will get a lot of noisy support when play recommences this afternoon, but with blinds of 25,000/50,000 (ante 5,000) and the average chip stack of 3,139,000, Palumbo will have his work cut out – especially as he is seated immediately to the left of EPT San Remo chip leader Daniel Neilson.