A computer hacker managed to compromise Negreanu’s PokerStars and e-mail accounts, recklessly playing with Negreanu’s $100,000 in funds on account at the world’s top poker site. 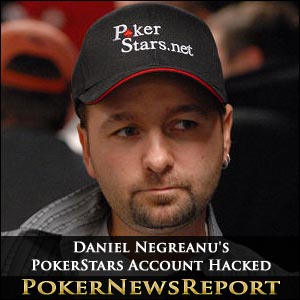 A computer hacker managed to compromise Daniel Negreanu’s PokerStars and e-mail accounts, sitting down at the virtual felt under the Canadian pro’s screen name and recklessly playing with Negreanu’s $100,000 in funds on account at the world’s top poker site.

Seemingly not contented with PokerStars’ hefty deposit bonus of 100% up to $600, the internet hacker instead enjoyed throwing around KidPoker’s bankroll. By all acounts, the hacker’s poker skills paled in comparison to his devilish computer talents, as he played very poorly. Seated at the $100/$200 no-limit tables, he dumped more than $46,000 in roughly 400 hands.

Poker players noticed the erratic play emanating from Negreanu’s account, with some posting on popular poker forums that the poker pro was perhaps hungover and making poor decisions. In one particular hand, the miscreant hacker called five bets with A-5 offsuit. In response to the posts by confused fans, Negreanu’s posted reply said, “Some of you NVGtards really thought that was me??? Man HSP [High Stakes Poker] has really done wonders for my image.”

Negreanu’s reference to the poker television show High Stakes Poker and his image taking a hit is due to the fact that in seven seasons on the cash game TV poker show, KidPoker has lost $2,182,850, making him the biggest loser in the show’s history.

Negreanu became aware of the break-in as he was returning home from competing in the Aussie Millions in Melbourne, Australia. Upon discovering the hacking of his accounts, Negreanu tweeted his friends and fans, “Important: Do NOT send me any emails the account appears to have been hacked. Just landed in LA nice news.”

Negreanu’s most recent effort in the land down under was finishing as the bubble boy in the 2012 Aussie Millions Super High Roller Event with a buy-in of $250,000. Sixteen players ponied up the massive quarter of a million dollars entrance fee. Only the top three finishers were guaranteed money in the prestigious event. With just four players left in the tourney, Negreanu shoved all his chips into the pot, about 750,000, holding A♠ 8♦ from the big blind. Patrick Antonius made the call with pocket Jacks. With the board showing Q♥ 7♦ 4♣ 9♣ 10♦, the Jacks held up, busting KidPoker out of the game.

One of Negreanu’s stated goals for 2012 is to move into first place on the all-time money leader list. Had he won the Super High Roller event, he would have done just that with the $2.1 million in first place prize money, jumping over Erik Seidel in the process. Instead, Negreanu fell to third place on the all-time list, as the recently-back-in-action Phil Ivey won the tournament and passed Negreanu to take over second place.

Rumor has it that PokerStars will reimburse Negreanu’s account with the money foolishly squandered by the computer hacker.