Negreanu will tomorrow take on online specialist ‘rUaBot’ in a series of Limit Hold’em Challenges, in a marathon session of $200/$400 limit heads-up hands. 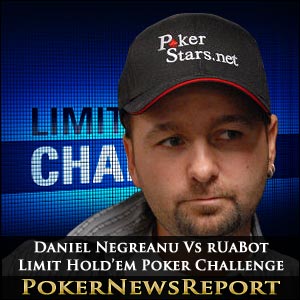 Canadian poker star Daniel Negreanu will tomorrow take on renowned and mysterious online specialist ‘rUaBot’ in the first of a series of Limit Hold’em Challenges, which will see the opponents battle it out in a marathon session of $200/$400 limit heads-up hands.

Team PokerStars Pro Daniel Negreanu will face the unknown ‘rUaBot’ in 1,250 hands of high stakes poker over two tables, starting at 14:00 ET (Eastern Time Zone), with each players beginning with $75,000.

The winner will, of course, be whoever ends up with the most cash at the end of the thousand-plus hands, although there could well be a bustout before that milestone is reached.

WSOP Star is On Form

The four-time World Series of Poker (WSOP) champ has certainly been on top form in the world of No-Limit Hold’em recently, finishing as runner-up in the €25,000 buy-in European Poker Tour (EPT) Grand Final High Roller in Monte Carlo for $790,304, which he jokingly said will pay some bills.

Even before that big prize, the 37-year-old had pocketed $409,279 for exiting in sixth place during the Grand Final’s €100,000 buy-in Super High Roller, so we know the Toronto native most definitely has the bucks to face-off against ‘rUaBot’.

But will he have the skills? That’s the question everyone who logs on to PokerStars tomorrow to check out the action will be expecting an answer to.

Well, ‘rUaBot’ – who has decided to retain his anonymity for now – began his poker career in the world of Limit Hold’em to become something of a specialist over time, so the Canadian superstar most certainly won’t have things all his own way tomorrow.

‘rUaBot’ is Ready for Challenge

The challenger chatted to the PokerStars Blog staff about the match-up, saying that he believes fixed limit poker is more strategic than no-limit”, while also pointing out that, in his opinion, no-limit results in more guessing games, like: ‘Would he bluff here or wouldn’t he?’

While admitting that such situations also frequently occur in fixed-limit, he reckons there is much more space for general strategic adaptions in the variation he prefers.

Additionally, ‘rUaBot’ emphasised that, while establishing a standard game is pure math – that’s arithmetic to those of you in the UK and Ireland! – there is an art needed to exploit your opponent’s patterns. He reckons that will always be the case, too. We shall see what tomorrow brings.

This head-to-head is not a one-off, however, with several specially invited pros set to compete in later high-stakes Limit Hold’em Challenges. While not revealing the stars that have been lined up, PokerStars stressed that the roster will feature some of the world poker’s biggest names, as well as contenders – such as ‘rUaBot’ – to take up the rivalry.

In fact, Negreanu has faced the 21-year-old twice in this series, with the result tied at 1-1, although the Swede has a healthy lead of $123,500 from their No-Limit Hold’em match-ups.

The latest addition to the stellar world of online high-stakes poker will undoubtedly attract great attention. Let’s just hope it’s as exciting as the SuperStar Showdowns.

You can watch the match online at PokerStars.