Popular poker figure Daniel Negreanu launched a full-out attack on the online regulars stating that they are the one who actually kill the game. 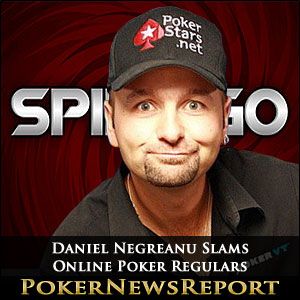 Popular poker figure Daniel Negreanu launched a full-out attack on the online regulars stating that they are the one who actually kill the game.

With 7.5 million games already played on PokerStars and with millions more expected to be played during October 9 – 19, 2014, the Spin and Go’s are the hottest format around aiming to boost the reg-infested online poker environment.

The recreational players are on board loving these games and willing to ride variance to new heights…and lows. The fast-paced, three-handed, lottery system was love at first sight for the ones who prefer the thrills of gambling. Most of the regulars however spat and cursed at the new games complaining about the high rake, huge variance and the roulette-like odds and probabilities. Many of them think the games are unbeatable, some are considering the possibility of turning a profit over a huge sample, like 100,000 games.

Overall, the online regulars are discontented with the addition of the new format claiming that it will kill their games – the classic Sit & Go’s – and poker in general as an environment where skill prevails in the long run. For Daniel Negreanu though, things are quite different.

The popular poker player slammed all those who believe that Spin & Go’s are bad for the poker environment in a post published earlier this morning on two plus two. Moreover, he considers that in fact the regs are the real menace for rooms like PokerStars. ‘DNegs’ said:

Do you know what kills games and destroy the poker ecosystem above and beyond all the things mentioned? Winning players. Yup, you guys lol. The winning players as a whole win a lot more money than the company makes each and every year. Yet, oddly, they still offer VIP programs to the very people who are essentially ‘killing the games.’

Negreanu approves the addition of the new format as it helps to level the playing field and allow recreational players some breathing room. He even said that the move will be a good one for the regs, on the long run, only just they don’t yet know it. This kind of games will attract more and more amateurs who are the main priority of the poker industry.

You guys don’t even want to know what I would do to the VIP programs if I was in charge. I would focus on giving bonuses to the LOSING players exclusively. They’d play more, last longer, and the pros would get the money in the end anyway. I think it’s overkill to not only have pros crushing all the recreational players, but then also giving them the majority of the bonuses on top of that?

The regulars reacted immediately stating that in fact PokerStars is the only real winner by adding the Spin & Go’s and not the recreational players because of the huge rake and lottery system. They say the amateurs will lose money a lot quicker and a very, very tiny percent will invest in playing the higher stakes. Without the regs, the poker room would generate much less rake as they are the ones who multi-table and play more on average.

Who has the better hand in this heads-up battle? Is the Spin and Go format a good addition for the game as a whole? Are the regulars the killers of the online environment? Let us know in the comments below which side are you on.

Underneath an infograph from PokerStars about their New Spin and Go’s: 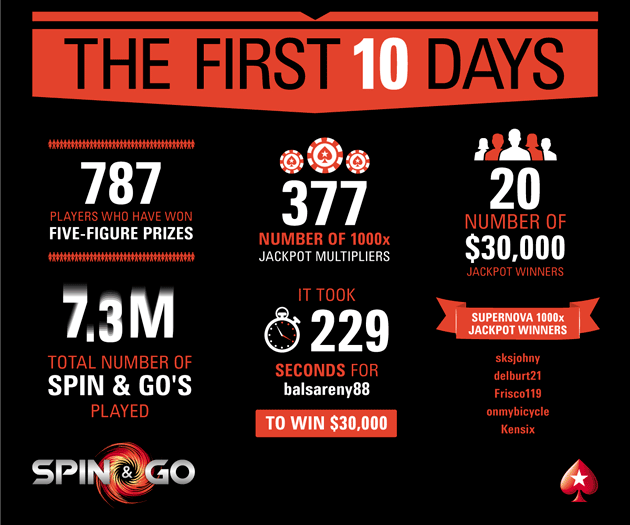