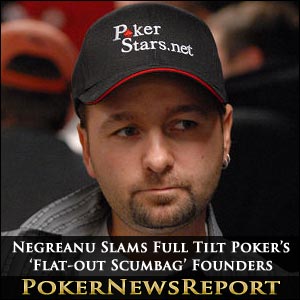 Four-time World Series of Poker (WSOP) bracelet winner Daniel Negreanu released an up-to-date video blog on YouTube after getting this “webcam thingy figured out a little bit” – initially talking about visiting Brazil and Ireland for the first time.

However, after also discussing Jason Somerville’s coming out blog, gay marriage and St Valentine’s Day, the Canadian superstar went on a wonderful rant when referring to Ray Bitar, Howard Lederer and Chris Ferguson as “absolute, flat-out scumbags” because of their involvement with Full Tilt Poker and the deafening silence that has followed since the website’s closure.

Bitar, who is the chief executive officer with Tiltware – Full Tilt’s parent company – launched the poker room back in 2004 with the assistance of the likes of two-time WSOP bracelet winner Lederer and Ferguson, a five-time WSOP champion.

But 37-year-old Negreanu has little time for that trio, beginning his furious rant around six minutes into the video blog after appearing relaxed and calm beforehand.

That all changes, however, when Kid Poker gets on to the subject of Full Tilt Poker’s demise – following the events of Black Friday last April 15 when the US Department of Justice (DoJ) shut it down because of charges relating to illegal gambling, money laundering and bank fraud – and the effects this has had on millions of online poker players across the globe.

Negreanu said: “In a recent blog, I made some comments about Howard Lederer, Chris Ferguson and Ray Bitar – mentioning something to the effect of old school Vegas-style, baseball bats to the groin for what they’ve done…

“I realise that those comments are pretty harsh – and I’ve had some time to think about what I said and, yeah, I think they’re absolutely appropriate. I do, Howard.

“If you’re listening and watching this, I do. I don’t think I would have any problem with somebody who had $15,000 of their hard-earned money on your site come up to you and bash you in the nuts with a baseball bat. Seriously, I’ve got no problem with it.”

The likeable Toronto pro – who has accumulated $3,634,251 from WSOP events – continued by saying: “Howard, Ray and Chris, you asked the poker world to accept your brand, come play at your site, come play Full Tilt, come play and chat with the pros…

“There’s a lot of people that would like to chat with you right now. But all of a sudden, zip. I waited a long time – I really didn’t say anything for months – hoping you guys could rectify the situation.

“But you are scumbags – absolute, flat-out scumbags – for ignoring the poker world that you fleeced for as much money as you did. And now you have nothing to say, nothing to say! Are you freaking serious!?!

“There is not a lawyer in the world that can force you to keep as quiet as you have. And it’s shameful, disgusting and you deserve a smack in the face for what you have done.”

Clearly becoming angrier by the second, Negreanu then suggested: “You have no respect for our community – you should be shunned and ostracised from our community forever for the lack of respect you have shown us by not giving us even a simple statement – something to the effect of, ‘Wow! I’m so sorry about what happened and I’ll do everything in my power to rectify the situation’.

He then poses “another question for you, Howard” when saying: “You think that maybe this is not your fault or that you had nothing to do with it, or whatever.

“Here’s a direct question. After Black Friday, when the company was insolvent…did you or did you not know that the rest of the world players, in Europe and all over the place, were depositing into a site that didn’t have the money to cover it? Did you know? And how do you possibly justify that?

“Whether you guys knew about Black Friday before it happened is irrelevant at this point. Did you know that this company was insolvent and these poor schmucks in England and all over the rest of the world are depositing 600 – ‘ha ha ha’ – into your site and there’s no money there?

“Your site says your money is safe with us, blah blah blah, but, no, it wasn’t. And, if you knew it, which I know you did, you’re scum.”

Obviously calming down slightly, the Canadian said: “Man, I went off pretty good there, didn’t I. But you deserve it. You all deserve it. You’re just condescending, arrogant, incompetent morons who have shunned the poker world by not making a statement.

“If you guys would have come out with a statement, first two months, first three months, whatever, maybe I could have found some solace in the fact that at least they care.

“But you don’t care – you obviously don’t care what the poker world thinks of you because silence, you know what that looks like? Guilt. Because you all are guilty, period, end of story.”

Well, that’s one heck of a video blog from Daniel, although I’m pretty certain many of Full Tilt’s customers – who have still to gain access to their accounts at the poker room – can understand where he is coming from. Of course, it will be interesting to see if this rant prompts a response from Bitar, Ferguson and Lederer.

Additionally, what will Groupe Bernard Tapie make of it all as the French investment company moves forward with plans to purchase Full Tilt from the DoJ for an estimated $80 million?

Earlier in his blog, Negreanu also discussed one-time WSOP bracelet winner Somerville’s decision to come out as gay, saying that, while he did not know of the American’s sexual inclination, he was supportive of him.

Negreanu – who also has two World Poker Tour (WPT) titles to his name – did, however, state that his reaction to online poker sensation Somerville’s blog confession was one of: “No way, you’re kidding me!”

He then went on to talk about his support for the 24-year-old, saying he believes that, while in itself not a huge deal, Somerville’s decision to make known that he is gay is important to the world of poker as some countries around the globe still possess “archaic” beliefs in relation to homosexuality.

Ultimately, Negreanu said: “I’m proud of him. I think it’s a good thing”, before adding that Somerville is “just the right guy to do it.” He concluded by adding: “Good on ya, mate.”

Thereafter, the Canuck star moved on to St Valentine’s Day, suggesting that guys should make every day special for their loved one – as opposed to being influenced by advertising campaigns from card-makers on one particular day of the year.

He said: “Just do it on March 8, just because you love her. Make Valentine’s Day every day of the year and see how that does for you.”

Even earlier in his latest blog, a cheerful Negreanu revealed details of his upcoming schedule, saying: “Just packed and ready to go to Brazil. Looking forward to it – I’ve never been to Brazil before.

“I’ve just added Ireland to my schedule…so I’m going to the Irish Open, I’ve never been there before, so I’m looking forward to that.

“I tweeted: ‘What do people do there?’ and everyone mentioned Guinness, and drinking a lot, and pubs and cold…not quite Brazil, but it will be fun. We’ve got some fun going on there at the Irish Open that you’ll find out eventually.”

Negreanu’s full video blog – in which he also discusses his health as a vegan, as well as the upcoming WSOP and increased levels in higher buy-in events – can be found at www.youtube.com/watch?v=qLiGJFTSMZ4.